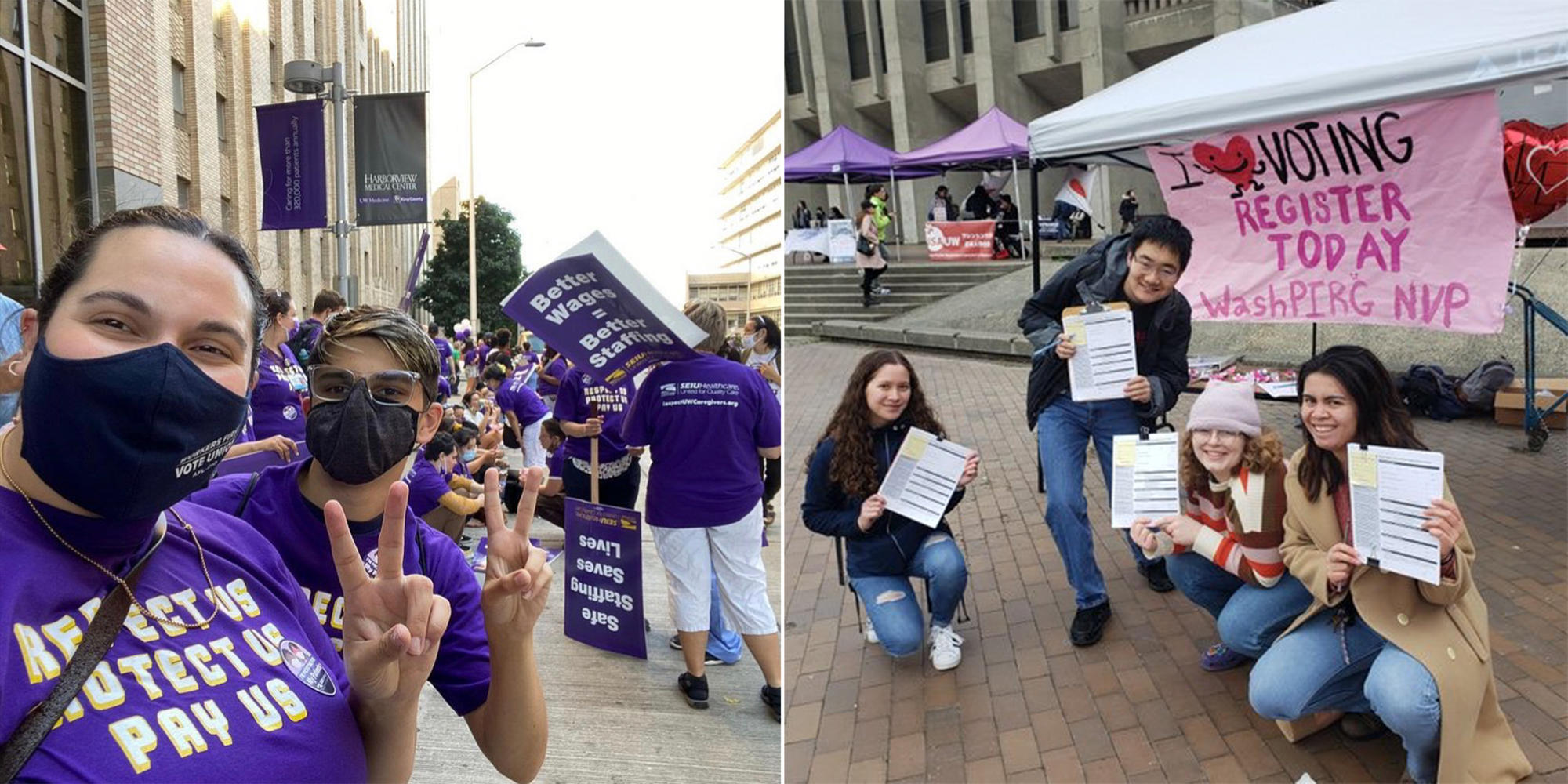 “It’s hard to say for sure why this is,” Watkins said. “But it definitely seems to be a model not just here, but across the country.”

In the August primary election, only 24% of King County voters in the lowest age bracket, 18 to 24, voted. The same election saw almost 65% turnout among voters 65 and over. While Watkins says recent youth voter turnout in King County does not indicate any major changes to higher youth engagement from previous years, a 2020 survey from the Center for Information and Research on Civic Learning & Engagement found that 27% of 18 to 24-year-olds said they took part in protests that year, an 11-point jump from 2018.

Allison Kirste, a recent University of Washington graduate, was the chair of the academic chapter of WashPIRG, a non-partisan student group that promotes civic engagement. As the campaign coordinator for the organization’s New Voters Project, Kirste had numerous conversations with students whose ballots were waiting unopened on the kitchen counter at their parents’ homes in Tacoma, Shoreline or Yakima.

This is the third story in a three part series on young people in politics. The first part focuses on the young progressive candidates for the election in Washington. while the second part focuses on Seattle activists who entered politics.

While Kirste says registration is a barrier for young voters who move often – voters must re-register with every change of address – she sensed in her conversations with young voters a problem beyond logistics. Young people, she said, were not convinced the vote would change much.

“We see, especially among young people, a feeling of boredom with electoral politics,” said Kirste.

Kirste herself, who has spent two and a half years ‘getting the vote out’, does not see voting as the only, or even the most effective, means of civic engagement.

Last summer, protesters in Seattle paid house calls to city council members, the mayor and even the chief of police, demanding a racially just justice system. “Define the police” was one of the many rallying cries of the summer, but now, in the November general election, there are few options to “reject” the police budget.

“Young people are probably one of the most, if not the most passionate about politics,” Kirste said. “There is a lot of frustration with how the political system works, so civic action has to manifest itself in other ways, such as demonstrations. It’s about finding other ways to be heard.

In Seattle, police fundraisers have prison abolitionists like Nikkita Oliver and Nicole Thomas-Kennedy on the November ballot, respectively, for a seat on city council and a city attorney. But none of the city’s mayoral candidates are promising to eliminate incarceration or drastically cut police funding.

Chetan Soni is a sophomore high school student and local activist who recently worked on the youth campaign team for progressive mayoral candidate Andrew Grant Houston. Soni was drawn to the campaign because of Houston’s daring plan to fund the police. It didn’t hurt that Houston came from an activist background: Soni had already organized alongside him with the Sunrise Movement, the youth-led climate action campaign.

“You have to do community outreach on the ground, but you also have to do electoral politics to see the change you want to see,” Soni said. “There is neither. You need both.

With this in mind, Soni likes to break her organizational capacity down into three parts: 25% within the system, putting pressure on elected officials; 50% community work, such as its involvement in mutual aid networks that distribute food, water and supplies to people in need; and 25% electoral politics, such as his recent work on the Houston campaign, which garnered less than 3% of the vote despite a contribution of $ 400,000.

Soni does not have a strong desire to run for office. But, during the recent regional elections, some young people registered their name on the ballot.

Varisha Khan, who was an activist student at the University of Washington, became the first Muslim woman elected to Redmond City Council in 2019, when she was 24. Mohamed Abdi, a 24-year-old Somali born in a Kenyan refugee camp, is currently running for Tukwila city council.

Abdi says activism is all he knows. In 2016, when the death of his 16-year-old cousin was initially considered suicide, Abdi and his family rallied the community to demand that the Seattle Police Department conduct a more thorough and transparent investigation. Investigators ultimately concluded that the teenager died of an accidental fall.

“It was a great moment because it just showed the beauty of bringing people together and how important it is, you know, to be there for each other,” Abdi said. “There is nothing like it.”

Abdi recognizes that today’s systems fail people of color, exactly, he suspects, as they were designed to do. But he remains optimistic about electoral politics.

“I come from an activist and organizing background that brought together East Africans, Blacks and Muslims,” Abdi said. “I don’t need a title to validate this. I just want to be in a position where I can have even more impact.

Even though progressive youth can mobilize a population with low turnout, a certain cynicism can remain.

“I feel like it is only a matter of time before elected community activists become career politicians because of this culture inside government offices,” said Soni, the teenage activist from Seattle. “It’s a lot of pressure to be against the establishment from within the establishment.”