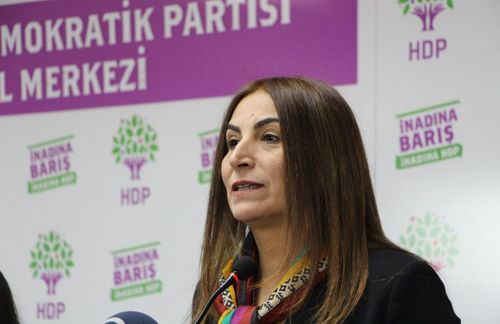 In a statement released by his lawyers a few days ago, it was pointed out that Aysel TuÄŸluk, who has been behind bars since 2016, suffers from memory loss and cannot carry out his daily activities on his own.

Istanbul’s Forensic Medicine Institution in mid-September said “she can stay in jail” for the jailed politician. The report from the Kocaeli Medical Institution stated that “she could not stay in prison”. The requests for the release of his lawyers are repeatedly rejected.

In this context, 68 women’s rights organizations issued a written statement today (December 21) and declared: “It is time to show solidarity with Aysel TuÄŸluk”, stressing that “the administrative and judicial authorities who have ignored the announcement that “she cannot stay in prison ‘will be responsible for any adverse consequences regarding TuÄŸluk’s health.”

The organizations also urged the authorities to release TuÄŸluk so that his treatment can continue under the necessary conditions.

The full statement is as follows:

“Act in accordance with the law, science, conscience”

â€œOne of the Kurdish politicians imprisoned in the F-type prison of Kocaeli No. 1 since December 2016 is Aysel TuÄŸluk.

â€œAysel TuÄŸluk is the first woman to have co-chaired a political party in the history of Kurdish political parties and the only woman to have been politically banned because she was banned from politics after the closure of the Democratic Society Party. She is also a lawyer, human rights defender and politician who has dedicated her whole life to the Kurds’ struggle for freedom and equality which will lead to an honorable peace.

“Her efforts, her struggle and her position in the life to which she has devoted have deeply marked our recent political history.

“As everyone knows, she witnessed the racist assault on her mother’s funeral and this inhuman attitude, which left irreparable damage to her memory. Going into her treatment and medical examination for months, the Forensic Medicine Institution of Kocaeli Faculty of Medicine unanimously drafted a report stating that she was not fit to remain in prison; despite this report, a new report released by the Forensic Medicine Institute of Istanbul indicated exactly the opposite.

“This institution, which has long imposed itself with its reports in violation of ethics, conscience, science and law, has issued another of its reports against the science of medicine and consistently concluding that prisoners politicians â€œmay remain in prisonâ€ despite their serious and terminal illnesses. In this report given for TuÄŸluk, the illness of dementia was denied.

â€œThe appeal of his lawyers before theâ€œ Supreme Council â€against the contradictory reports went unanswered; the worsening of his illness is monitored.

â€œWe oppose what Aysel TuÄŸluk, as a politician who fought all types of violence against women for years and fought for women’s freedom, is forced to go through today; we ask for his release. In light of our demand for â€œJustice for Womenâ€, we also reiterate our demand for freedom for TuÄŸluk and all women imprisoned for political reasons like her.

â€œThe state, mainly the Ministry of Justice, is responsible for failing to comply with the requirements of the full committee report stating that Aysel TuÄŸluk cannot stay in prison. Administrative and judicial authorities who ignore the report “she cannot stay in prison” will be responsible for any adverse consequences regarding TuÄŸluk’s health. “

â€œWe call on all authorities who have a role in this illegal process imposed on them to act in accordance with the law, science and conscience; let us recall that TuÄŸluk must be released as soon as possible so that her treatment can continue under the necessary conditions and reiterate our call for SOLIDARITY “.

On December 29, 2016, while she was vice-co-chair of the People’s Democratic Party (HDP), Kurdish politician Aysel TuÄŸluk was arrested along with seven other politicians from the Party of Democratic Regions (DBP) and the Congress of Democratic Society ( DTK).

The indictment filed against TuÄŸluk, who was DTK’s co-chair until September 2014, brought her statements to the press as well as the funeral she attended as criminal evidence against the politician.

As Aysel TuÄŸluk’s appeal to the Ankara Regional Court of Justice was dismissed, his case was referred to the Court of Cassation.

The funeral of his mother

Aysel TuÄŸluk’s mother, Hatun TuÄŸluk, lost her life in 2017. On her last wish, her deceased body was brought to Ä°ncek cemetery in Ankara. Aysel TuÄŸluk left prison with permission and his mother was buried; Soon after, a group of 5-6 people gathered to protest the funeral.

Those who attended the funeral said that number was gradually increasing and they were attempting to attack the grave.

As the attacks continued, Hatun TuÄŸluk’s deceased body had to be removed from the ground and buried elsewhere. One of the people who attacked the funeral turned out to have a photo with Interior Minister SÃ¼leyman Soylu at the police station.

Aysel TuÄŸluk’s older brother Alaattin TuÄŸluk said his sister lost her memory after the death of their mother:

My sister didn’t look well. She asks the same question 3 to 4 times. She doesn’t remember some things. For example, when she wants to ask about someone in the family, she says, â€œWho was that, who? They are close people, it is impossible for him not to know them. I’m afraid this will come to an irreversible point and we will lose my sister … I want treatment before it’s too late. Let another committee look at it and make a decision on it. She is now receiving 1 to 2 medications. It is not enough. She will go [to jail] after the end of his treatment.

She was a founding member and co-chair of the Democratic Society Party (DTP) and elected Member of Parliament for DiyarbakÄ±r in 2007-2009. She became MP for Van of the People’s Democratic Party (HDP) in 2011-2015. She was HDP vice-co-chair responsible for law and human rights.

Born in ElazÄ±ÄŸ in 1965, she graduated from Istanbul University Law Faculty and worked as a freelance lawyer. (TP / SD)