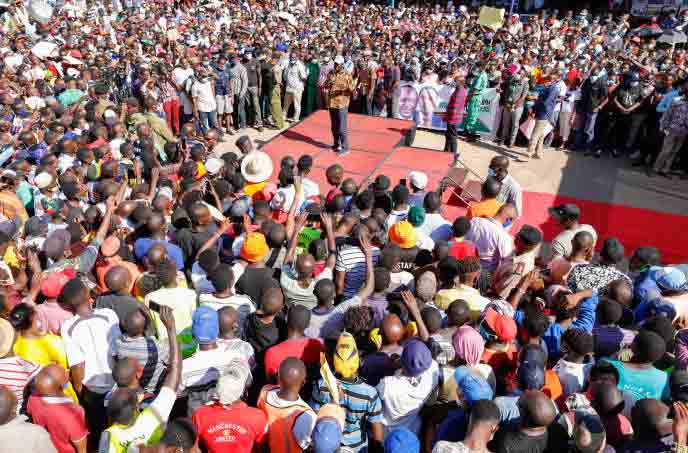 Despite the strict Covid-19 protocols in place for a year, senior political leaders have continually flouted the same, leaving a trail of infections and deaths.

From President Uhuru Kenyatta, from his deputy William Ruto to opposition leader Raila Odinga and their cronies, the supreme leaders continue to defy the same protocols they seek to uphold and use to reprimand those with status. less â€in society.

The past weekend saw a flurry of political events as the respective leaders visited different counties – some to launch projects and others to popularize their stab at the presidency, drawing gigantic crowds and potentially an influx. of Covid-19 infections.

It should be noted that with only around one million Kenyans vaccinated, the remaining 53 million are likely to contract the new disease.

Opposition leader Raila Odinga was on the coast on Sunday holding a series of meetings with politicians as he sought to consolidate his grip on the region and avoid incursions by DP Ruto.

Raila met politicians from Mombasa, Kilifi and Taita Taveta at his residence in Nyali. The day before, Raila was in the Place du TrÃ©sor in the district of Mvita to launch the medical cover of the National Hospital Insurance Fund (NHIF) for the district.

ANC chief Musalia Mudavadi began his two-day tour of Nakuru County on Saturday, which began with a courtesy visit to Governor Lee Kinyanjui. He then visited the city of Nakuru accompanied by Nairobi Senator Johnson Sakaja among other leaders where they interacted with a huge crowd.

On Sunday, the former Deputy Prime Minister was due to attend two church services from NEEMA PCEA at 8:30 am and at St Peters Catholic Church, Lanet. He was then to meet with representatives of the communities of the cosmopolitan county.

The tour came just three weeks after Mudavadi concluded another in Mombasa, where he held meetings with various local leaders and residents, mobilizing support for his 2022 presidential bid.

The Vice President was also in action where he attended the ASEP church service in Umoja and a fundraiser for the construction of a youth church.

The second in command then addressed a public gathering in Umoja. Ruto also hosted delegations to his Karen home and met with different groups of women and youth.

Additionally, the western region – which is under intense lockdown – is currently reeling from an increase in coronavirus infections after Madaraka Day celebrations in Kisumu.

Even before the June 1 holiday, coronavirus infections were on the rise, hospital isolation units were filling up and the highly contagious Delta variant was first found in Kenya in Kisumu County.

On the day of the celebrations, achieving social distancing was a nightmare due to the high number of people at the Jomo Kenyatta International sports complex.

Previously, it was estimated that only 3,000 guests would have access to the complex, but on D-Day, the 17 spectator stands erected around the stadium were packed.

The consequences are now reverberating throughout the region, as evidenced by the latest Covid-19 statistics which indicate an alarming increase in infections and deaths.

To counter the current crisis in the region, the health ministry imposed a restriction on gatherings and extended a dusk-to-dawn curfew in Kisumu and more than a dozen surrounding counties, but it was perhaps be too late.

Partial election campaigns such as those currently underway in Muguga neighborhood and Kiambaa constituency are also to blame for the spread of Covid-19.

In the by-election scheduled for July 15, the main candidates – Jubilee’s Kariri Njama and his competitor UDA Njuguna Wanjiku – stepped up their campaigns. They have resorted to measures such as door-to-door campaigns, roadshows and even rallies.

“The truth is that when politicians, including the president, roam the country for example, launching projects, what happens naturally is that people flock to see them,” Kagwe said in a statement. previous interview with The Standard.

While admitting that it is the job of the police to deal with violators of Covid-19 protocols, he called on Kenyans to avoid political gatherings.

â€œSocial responsibility demands that you not be at a political rally when you know you shouldn’t be. If we all stopped participating in political rallies, they would stop. If we crowd into places for whatever reason, we will get an increase in the number of cases, â€he added.

Interfaith Council Chairman Anthony Muheria called on political leaders to be concerned about the growing number of cases in the western region.

â€œSometimes we have to do unreasonable things. We have to worry as Kenyans and sacrifice some things for our survival, â€Muheria said.