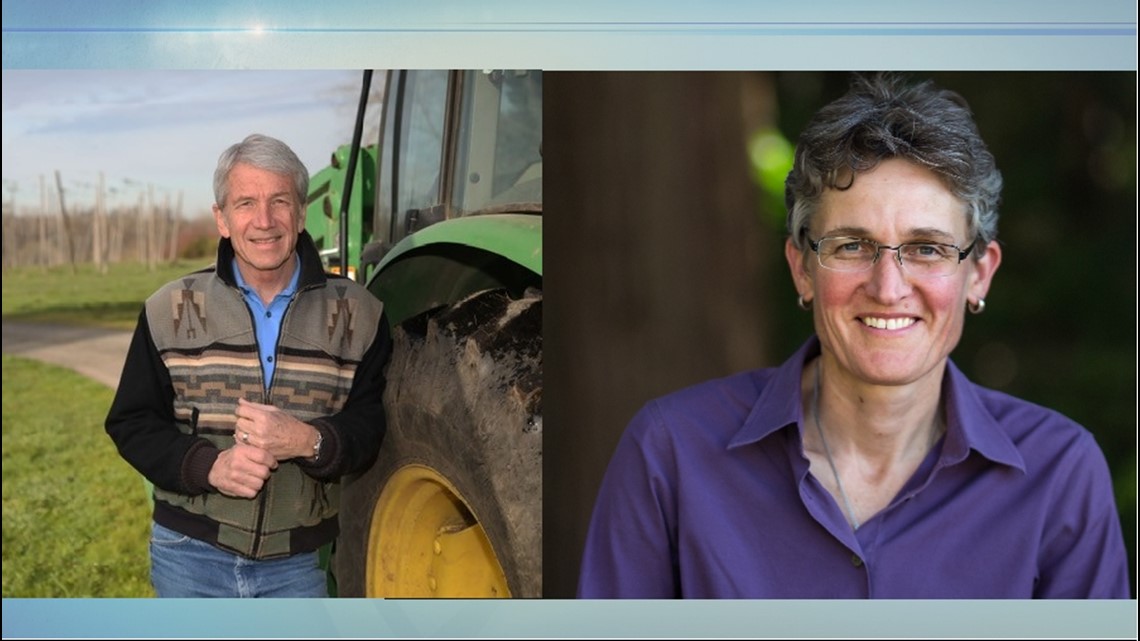 McLeod-Skinner argues that Schrader is too right wing for the district, while Schrader said he bridges the gap between far right and far left.

PORTLAND, Ore. — Political insiders are predicting that the race to represent Oregon’s newly redesigned 5th congressional district could become the nation’s “marquee” to watch, according to Politico.

They run in a newly formed district. The borders were reshaped by the Oregon legislature last fall and now include most of Clackamas and Marion counties, but not Salem.

The district also encompasses Linn County and extends through the Cascades into much of Deschutes County, where McLeod-Skinner lives in Terrebonne.

Rep. Schrader and Jamie McLeod-Skinner were guests on this week’s episode of “Straight Talk.”

RELATED: Redistricting Explained and How It Could Affect Oregon

About half of 5th District voters are estimated to be new to the district, and McLeod-Skinner sees an opening. In 2018, she ran against the then-representative. Greg Walden (R) in a conservative neighborhood.

Although she lost the race, she was Walden’s most significant challenger and the first to win over 30% of the vote in the 2nd congressional district. She thinks the odds are in her favor in the new 5th District.

“In 2018, I ran in the toughest, most conservative district in Oregon, the toughest place to run for a Democrat, and I had the biggest electoral swing of any race in Congress across the country,” she said. “I was over 10 [in the polls] – by contrast, Kurt Schrader in his last race was minus 2. Those numbers matter because it’s a D seat plus one – if I had run D plus one in 2018 I would have won, hands down hand. If Kurt had run in a D plus one in 2020, he would have lost.”

McLeod-Skinner said Schrader had lost touch with his constituents, pointing to some of Schrader’s votes, including one against a bill that would have allowed Medicare to negotiate prescription drug prices, and another against increasing federal minimum wage.

“Kurt Schrader is not the guy we originally sent to Congress,” McLeod-Skinner said. “He’s gone so far to the right that running to his left just means you’re a Democrat.”

Rep. Schrader introduced his own prescription drug pricing bill that he said had a better chance of passing Congress. He said his votes reflect the makeup of his district, which includes Republicans, Democrats and a large portion of unaffiliated voters.

“It’s not an easy neighborhood to deal with – 40% of people said to both sides ‘I’m not interested.’ They’re not affiliated, so I have to bridge that gap between the far right and the far left (to) represent this district,” he said. “We forget that this is our job – representation, not to be a party ideologue. I represent this district and I’m proud to have done so for the past 10 years.”

Rep. Schrader has also come under fire for violating Congress’ STOCK Act for improperly disclosing companies’ stock trading. Business Insider reported that Schrader sold up to $30,000 of shares in Charter Communications Inc and insurance giant AON PLC in December and did not disclose the sales by the required deadline. Schrader said he does not personally trade stocks and all of his investments are managed by an outside company.

“I support members not trading stocks. When I came to Congress, I gave that up. I have an independent financial adviser who does all the stock trading for me. I don’t “I have no idea what’s going on in there. I get a report just like everyone else does at the end of the month, and apparently they messed up and didn’t report this ‘Charter’ trade in time” , did he declare.

Schrader said they made the correction as soon as they became aware of the missed deadline.

Senate Democrats have introduced a bill that would bar members of Congress and their families from trading while in office. Schrader did not sign a House version of the bill, but said he would take a look at it.

“It sounds good to me from the way you describe it. I haven’t actually seen this particular legislation. Like I said, the main thing viewers know is that I didn’t participate actively involved in any stock trading since joining the U.S. Congress,” he said.

Each candidate explained why they would best represent Oregon’s Fifth District. McLeod-Skinner said she will represent families, democracy and the environment.

“Politics has torn us apart and we need to heal. And my leadership has always been about bridging the gaps,” she said. “And if you believe in this vision, I want to ask for your support, because we are against someone whose corporate PAC money buys the airwaves and also spreads a lot of falsehoods, and he represents those who pay for those .ads and not us.”

Schrader said he is proud of the work he has done for the district since 2009 and especially proud of the COVID relief programs and the infrastructure bill passed by Congress during his last term.

“I’m really excited about the work we’ve done and people like me have the ability to deliver for a tough and challenging district like this.” he said. “We need people who care about our state, care about our country, and I do that deeply and passionately. And I’m very concerned about the extreme partisanship that has infected our political discourse. So I think that it’s extremely important to have people like me, who’s always lived in the neighborhood, and I’ve been representing it ever since, and I think I’m doing a really good job.

Straight Talk airs Fridays at 7 p.m. and Saturdays and Sundays at 6:30 p.m.

Straight Talk is also available as a podcast.