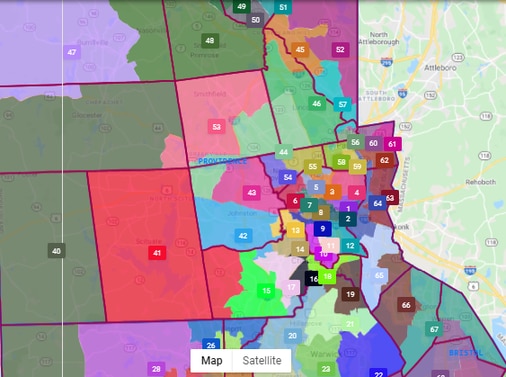 RI redistricting bill is criticized from both sides of the aisle

For example, the GOP says the proposed Senate map moves a narrow slice of Lincoln into District 22 because Sen. Stephen R. Archambault, a Democrat from Smithfield and co-chair of the redistricting commission, owns property straddling the Lincoln/Smithfield line.

And the GOP says the proposed House map places part of central East Greenwich in House District 24 because Rep. Justine A. Caldwell, a Democrat from East Greenwich in an adjacent District 30, “is afraid of losing the port area” of the city.

“General Assembly leaders should think carefully before moving forward with these maps,” the Republican Party said. “Past gerrymandering in Rhode Island not only led to costly litigation, but also cost some State House politicians their power.”

Additionally, ahead of the meeting, the Rhode Island Progressive Political Cooperative sent a message criticizing a section of the bill that appears to give party leaders the ability to override local district committee members who decide party endorsements.

“Want to see how democracy dies in darkness? asks the cooperative. “Look no further than the new redistricting bill. In this bill, legally elected district committees (the committees that decide on approved Democratic candidates) are replaced by hand-picked committees selected by the entrenched conservative party — with the explicit mission of preventing progressives from winning the power in our state.

Representative Evan P. Shanley, a Warwick Democrat who chairs the House Committee on State Government and Elections, said that was not the intention of the legislation.

And Rep. Robert D. Phillips, a Woonsocket Democrat who co-chaired the redistricting commission, said the language reflected redistricting legislation dating back to the 1970s. He said it was only intended to give party presidents the power to make “temporary transitional appointments” when certain district committees no longer live in their districts due to new district boundaries.

But this section of the proposed redistricting legislation drew the ire of many who testified on Monday.

For example, Enrique Sanchez, political director of the Black Lives Matter RI PAC and Democratic candidate in House District 9, said it was “immoral and unethical” to give so much power to party presidents who would favor the committee members representing “the interests of the corporate power establishment.

“Clearly this bill is a roadblock to keeping progressives from winning more districts across the state,” Sanchez said. “Workers deserve to participate in these local district committees. This bill minimizes the chances of people who have no ties to the current rulers getting involved in local politics.

John M. Marion, executive director of Common Cause Rhode Island, said the group stressed the importance of making underlying redistricting data public, disclosing communications with the redistricting consultant outside of public meetings, and ensure that the public had the opportunity to review the final maps before the final vote of the redistricting commission.

“Looking at the events of the last few months, we are not surprised that the commission has disappointed in almost every way,” he said.

“These plans are Democratic partisan gerrymanders,” he said. “Why is that? The plans you have in front of you value one thing above all else: protecting incumbents of both political parties.

Nothing in the law requires the commission to favor incumbents, Marion said. “In handing over this process to the state consultant, the commission has chosen to value the protection of the licensee above all else,” he said.

Steven Brown, executive director of the American Civil Liberties Union of Rhode Island, said he appreciates the redistricting commission’s recommendation to count state inmates in their homes rather than in adult correctional facilities if they were to be in prison less than two years. year.

But he said he was disappointed that inmates serving sentences of more than two years continued to be counted at Cranston Prison Complex for redistributing purposes – a practice that critics called “gerrymandering in prison”.

“A dozen other states have taken care of this issue universally,” Brown said. “The problem with doing it halfway is that there’s still a significant problem in terms of districts in Cranston where there’s an overrepresentation that gives those districts more power than any other district in the state.”

He said he hoped the Assembly would amend that bill or consider separate legislation to completely eliminate “gerrymandering in prisons” by 2030.