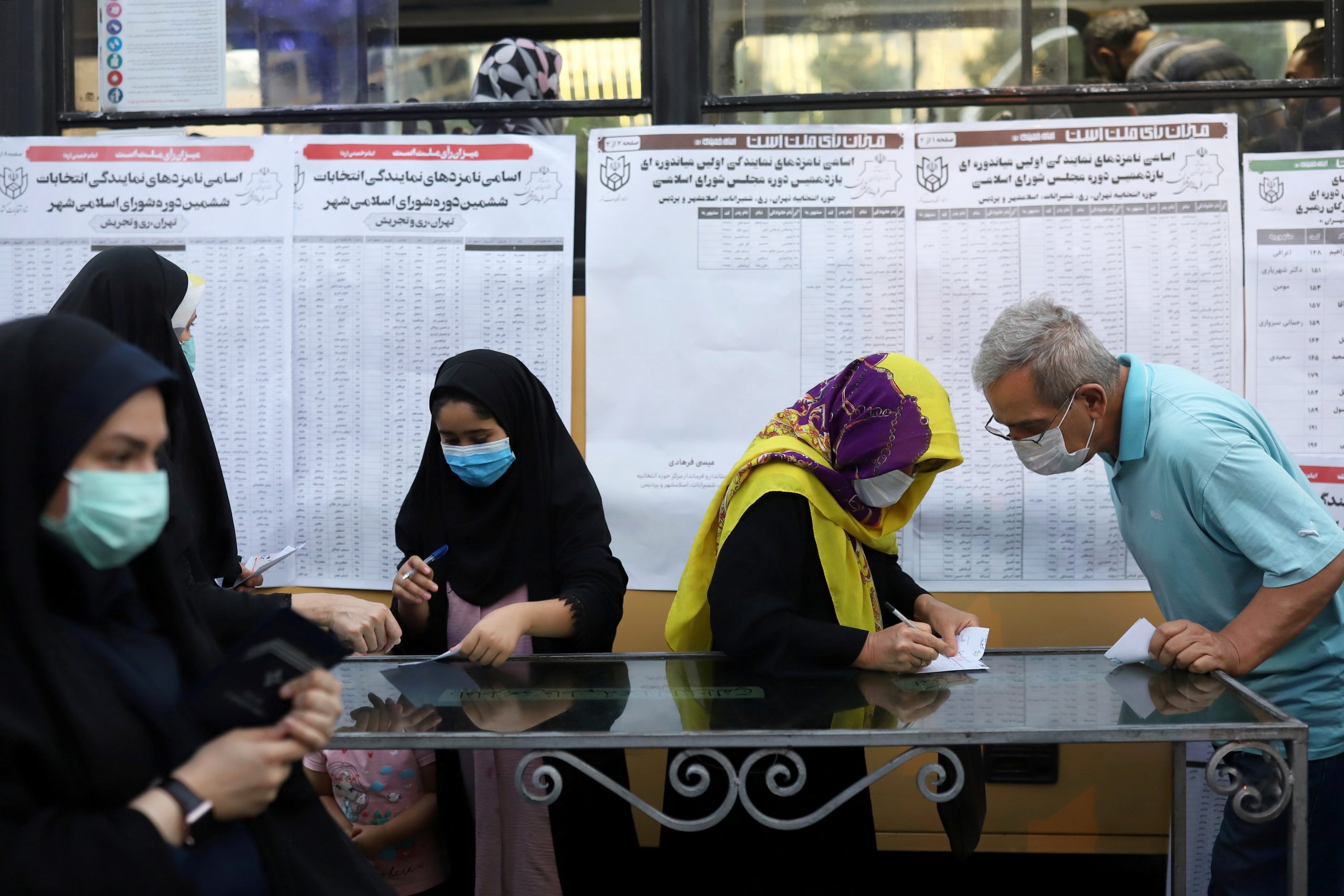 The victory of the head of the judiciary Ebrahim Raisi in the Iranian presidential election on June 18 will not come as a surprise to many Iranians. While voters undoubtedly felt disappointed with the country’s economic situation and the failure of President Hassan Rouhani’s two-term political platform, the Guardian Council, a monitoring body, also left little to chance. . By disqualifying all major reformist and moderate candidates who might have threatened Raisi’s ascendancy, the Council of Guardians oversaw one of the least competitive elections of the post-revolutionary era. Raisi was seen as the winner of an overwhelming result in a context of historically low voter turnout.

So why were pre-election polls conducted throughout the election campaign if there was never any doubt about the outcome of the election? One might ask why the regime – which is notoriously sensitive to electoral issues – would allow a poll to be held given that polls could undermine its carefully calibrated election result? He could have easily cracked down on pre-election polls, but there was little evidence that he did so on a large scale. Indeed, polls were conducted throughout the election period by various organizations, including groups linked to the Islamic Revolutionary Guard Corps, at the University of Tehran. Iranian Student Survey Agency, and other independent outlets.

The answer to these questions lies in the electoral process itself. Elections in authoritarian regimes are not a new phenomenon and, in fact, most autocratic regimes, including Iran, have built-in pseudo-democratic processes. This is known to academics as a â€œdemocratic veneerâ€ in which the regime makes symbolic democratic concessions that seem significant but which ultimately do not undermine regime control. It is a tool used by hybrid regimes to guarantee survival because it acts as a “safety valve” which allows citizens to express their discontent at the ballot box and to exert some influence on an often extremely limited aspect of the system. The political life. Plating also helps neutralize opposition by offering an attractive compromise between political inclusion and compliance.

But the veneer is more than elections, symbolic parliaments and pseudo-oppositions: it is as much a matter of pageantry as of actual voting. This performative democracy was in the spotlight in Iran last month. The official election debates between the presidential candidates were televised with much drama, as Supreme Leader Ayatollah Ali Khamenei issued a last-minute appeal pleading with the Iranians to vote: and vote, you actually determine the fate of the country in all major issues.

On election day itself, the Supreme Leader voted in a mediatized visit to a polling station at 7 a.m. in what appeared to be an effort to spur participation in an election that large numbers of disillusioned voters were expected to boycott. Indeed, new research has confirmed what autocrats have long known: Perceptions of electoral integrity correlate with a greater belief in the legitimacy of the regime and a lower likelihood of participating in protests. Today, it is not enough for authoritarian regimes to hold pseudo-democratic elections at regular intervals, they must also maintain a facade of electoral integrity and competitiveness. The Iranian regime learned after the post-election protests of several million people in 2009 that it cannot take this for granted.

Pre-election polls can also play a useful role in authoritarian elections. In 2020, scholar Shahram Akbarzadeh and I reviewed the polls conducted in the 2017 Iranian presidential election. We weren’t looking for accuracy, as there was no guarantee that the election was free and fair, but we wanted to know if polls should be taken seriously. While high-quality polls conducted by independent pollsters may hold autocrats to account, few polls have achieved such a goal. The vast majority were of poor quality, used poor sampling, and were opaque about how they got their results. Therefore, the final numbers were of little use, but that didn’t mean the polls themselves weren’t important.

In democracies, academics such as Klaus Krippendorff and Lisbeth Lipari have argued that polls can help replicate the very democratic processes they study. By asking voters about their voting intentions and publishing the result, polls in authoritarian regimes can also create a sense of genuine electoral competition.

In Iran in 2017, for example, a non-regime polling company polled voters on a daily basis, presenting the results on high-resolution graphs that plotted what is known as the evolution of voter sentiment as the day of elections approaches. elections. While the data is methodologically questionable, the professional-looking charts implied that real events during the campaign period, such as poor performance in debates, were influencing voters, and the final prize was yet to be won. Pollsters never asked Iranian voters if they trusted the electoral process, and the fact that non-government pollsters asked the questions meant that polling bodies saw merit in the process. Otherwise, voters might wonder why pollsters would ask such questions. In this way, polling processes can inadvertently produce and reproduce a pseudo-democratic reality.

In another example from 2017, the official news agency of the Islamic Republic (IRNA) shared the results of a poll that predicted a turnout of 63.9% and claimed that 46% of voters did not not yet chosen their candidate. IRNA optimistically estimated that, “given the growing popularity of presidential candidates and the holding of televised debates, turnout is expected to increase in the coming days.” While their expected turnout was almost ten points higher than the actual turnout, and therefore makes little sense, it is significant, as Iran’s democratic veneer is carefully staged and all concessions are made. strategic. Indeed, if it turns out that polls in democracies construct rather than simply reflect a democratic process, then polls carried out by agencies linked to the regime could represent a formal effort by the regime to contribute to the pageantry of elections. authoritarian. Such pageantry was even more important in the June 18 election, given how uncompetitive the Guardian Council had made the race.

In addition to making the electoral process more visible, polls in other contexts have also been shown to influence turnout by decreasing isolation between respondents and electoral processes. They also reflect the proximity of elections in a way that encourages non-voters to vote. If this effect continues in authoritarian regimes, then the very presence of polls would complement the regime’s participation programs. Autocrats have been sensitive to participation since the citizens of the Soviet Union began to use non-voting as a protest. Khamenei’s call for voters in 2021 and the dawn poll mentioned above suggest that he is all too aware that turnout is a politically sensitive indicator of the regime’s legitimacy. Pre-election polls could very well support this surge in Iran.

So, are the polls part of an active strategy to increase the integrity of the elections in Iran? We don’t know, although the regime’s tolerance for polls suggests it is viewed as minimally non-threatening. But, while unintentional, there is no doubt that the polls complement the regime’s need to convey a pluralistic process by increasing the sense of competitiveness and perhaps even influencing participation. In the context of the 2021 elections being the least competitive in the history of the Islamic Republic, this kind of pseudo-democratic pageantry was essential to clothe the electoral process with a semblance of pluralism. In this regard, pre-election polls can be not only a side effect of authoritarian elections, but an effect that helps reproduce the democratic veneer that a regime so badly needs.

Dr Dara Conduit is a research fellow at the Middle East Studies Forum of the Alfred Deakin Institute for Citizenship and Globalization at Deakin University, Australia.

An uncertain future for Iran under a minority president

On June 21, 2021, the Atlantic Council’s Future of Iran Initiative hosted an event to discuss the implications of the Iranian presidential elections on June 18 for US-Iranian relations. Read the main takeaways. 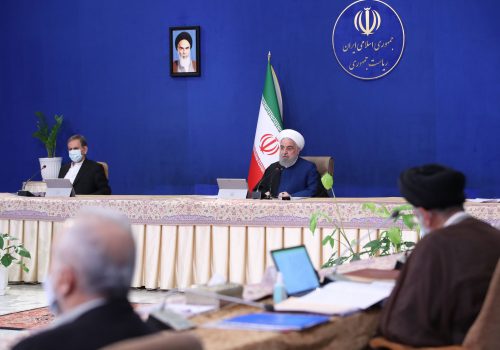 Although the final slate of candidates will not be announced by the Council of Guardians until May 26, it can be said with certainty that whoever emerges victorious will not have a material impact on Iran’s domestic or foreign policy.