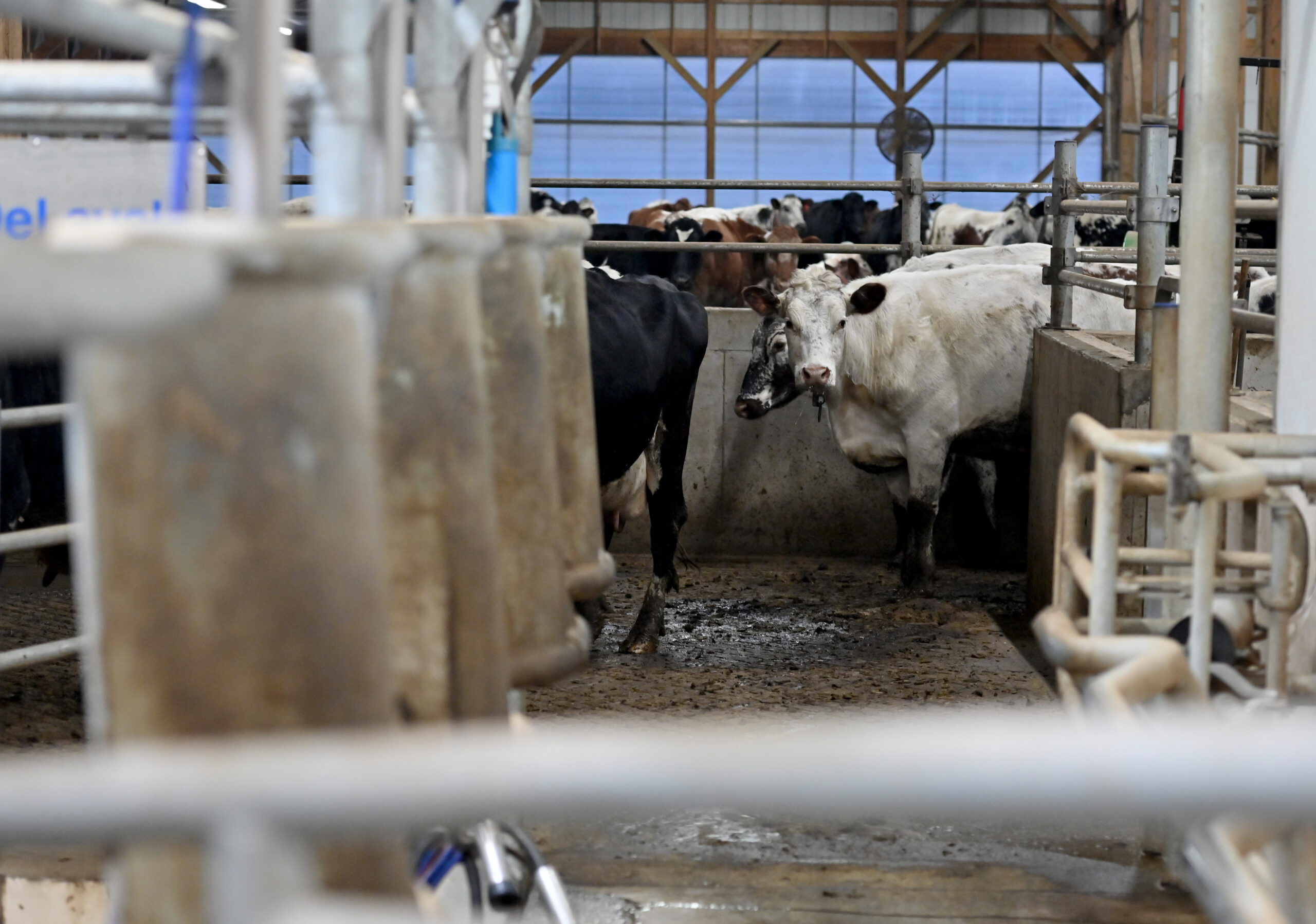 Every day at Schrack Farms in Loganton, Pennsylvania, Jim Harbach tends to his 1,300 dairy cows. The farm has been in his family for nearly 40 years and he manages it alongside members of his wife’s family. Although his business isn’t struggling yet, Harbach has recently noticed that rising operating costs are affecting farms across the region.

Costs for fuel, fertilizer and repairing vehicles and milking equipment have all increased over the past year, he said. Farmers, he said, have two options in such a situation: they can take on more debt or they can buy less feed and fertilizer, leading to lower yields. “That’s probably our biggest challenge,” he said. Like many Pennsylvania dairy farmers, Harbach would also like federal and state governments to relax environmental rules that add to his financial burdens.

In the midterm elections this fall, he and other Pennsylvania dairy farmers will have the opportunity to choose a new governor and senator. While farmers hope for a rollback on government regulations, few candidates have presented detailed plans for the agricultural sector or any other proposals that will help dairy farmers vote meaningfully on their work. This may be because less than 1% of Pennsylvanians work for the agriculture industry, giving the sector less political clout.

In the Senate race, for example, neither the Democratic candidate, John Fetterman, nor the Republican candidate, Mehmet Oz, have defined measures to help farmers. According to Fetterman’s campaign website, he supports the right of farmers to repair their own equipment as they see fit, wants “small farmers” to have a “fair opportunity” and believes that choosing between protecting the environment and job creation in the sector is a “false choice.

The Oz campaign website makes no mention of farming or dairying. Neither campaign responded to requests for comment.

According to the Center for Dairy Excellence, a state dairy industry group, Pennsylvania ranks eighth nationally for milk production. Unlike operations in other dairy-producing states like California, farms in Pennsylvania tend to be a bit smaller. Harbach’s farm is medium-sized compared to others in the state, he notes. But like other producers, he is always looking to improve his results.

John Dotter, whose dairy farm in Mill Hall, Pennsylvania, milks about 1,200 cows, is also worried about rising costs. More than that, however, he finds the state’s approach to managing transportation during the winter months frustrating. When snowstorms hit, major highways may be closed as part of a state Department of Transportation policy on commercial motor vehicles operating in such conditions.

Dotter said these stops increase the time it takes to transport milk. Since milk is a perishable product, he adds, delays can reduce revenue. Harbach, too, found it infuriating: “This micromanagement of our transportation system has gotten out of hand,” he said.

Dotter is also fed up with a state Department of Environmental Protection requirement that he write and implement a nutrient management plan to control how much manure he is allowed to spread. on its crops. These rules are in place to limit nutrient pollution like manure and other agricultural runoff from farms, which contaminates local waterways and threatens wildlife. But Dotter says the plans are “a huge amount of paperwork” and cost him thousands of dollars every year. “It’s getting out of hand,” he said.

Caroline Novak, assistant director of the Professional Dairy Managers of Pennsylvania, an industry group, points out that many Pennsylvania dairy farmers have embraced sustainability strategies. She cited mechanisms such as no-till, a soil management strategy intended to keep the carbon in the earth, and anaerobic digesters, which capture methane from cow poop and then convert the potent greenhouse gas greenhouse into more environmentally friendly biogas to sell or use as fuel.

Schrack Farms has a digester that partially feeds the farm, which Harbach says helps “tremendously” with energy bills and heating. He notes that the technology isn’t very common on Pennsylvania dairy farms: According to the USDA, only 25 dairy farm digesters have been installed in the state, which has more than 5,000 dairies. Novak said digesters have not proven feasible for many due to maintenance costs.

The Novak Dairy Managers Organization is one of the partners in a new federally funded research initiative at Pennsylvania State University to study the sustainability of dairy farms, called the “L ‘climate-smart agriculture that is profitable, regenerative, exploitable and trustworthy’, or CARAT. According to Armen Kemanian, project leader and professor of agricultural sciences at the university, the aim is to research the carbon footprint of different processes on dairy farms, from production to sale. Ultimately, he said, the project will come up with sustainability strategies that are good for both the environment and farmers’ businesses.

Last month, the university announced that the project would receive up to $25 million from the USDA’s Climate-Smart Commodities Initiative, a broad federal funding effort designed to expand markets for products from farms, ranches and forests that operate sustainably. It is notably one of five conservation programs run by the federal department that have been criticized for their lack of financial transparency.

Novak said one of the goals of Project CARAT is to eventually make way for climate-smart product labeling or climate credits for Pennsylvania dairy farms that practice sustainable strategies. “This is data we’ve wanted to capture for some time,” she said. “We demanded to know what we do well and what it is worth.”

Novak said his group of dairy managers has members who think their farms are already carbon neutral. To her, therefore, it makes sense that farmers in the state would prefer fewer regulations. “You don’t necessarily need legislation to encourage people to do the right thing,” she said. “Our members don’t need to be legislated; they don’t need laws requiring them to do these things.

However, few would dispute that agricultural pollution has been a problem for Pennsylvania’s ecosystems. Nutrient pollution in the Chesapeake Bay, for example, has threatened wildlife and led to excessive algae blooms. According to the Pennsylvania Department of Environmental Protection, the state is tasked with achieving 69% of the nutrient pollution reductions the Federal Environmental Protection Agency requires for the bay by 2025. .

Still, ahead of the high-profile Nov. 8 election, Dotter and Harbach are looking for candidates they believe will meet the needs of dairy farmers, which they say means less regulation.

“I would vote for the governor who is going to reduce the bureaucracy and the regulations that we have,” Harbach said.

ICN provides award-winning climate coverage and advertising free of charge. We rely on donations from readers like you to continue.

The campaign website of State Sen. Doug Mastriano, the Republican gubernatorial candidate, says that if elected, he will cut regulations, including those aimed at the natural gas industry. Mastriano also opposes current Gov. Tom Wolf’s cooperation in the Regional Greenhouse Gas Initiative, a multi-state program to reduce greenhouse gas emissions from the energy sector. . Among other carbon offset benefits, the initiative provides allowances to dairy farms that operate manure digesters.

The Democratic gubernatorial candidate, state Attorney General Josh Shapiro, has been endorsed by several environmental groups in Pennsylvania. He also supports keeping the state’s natural gas industry, although he has called for greater regulation of the chemicals involved in natural gas drilling and fracking. According to the campaign, Shapiro will also “invest in agricultural infrastructure and ensure that farmers have the financing and investments necessary for agricultural production.”

Green Party candidates for governor and lieutenant governor, Christina DiGiulio and Michael Bagdes-Canning, support the installation of more manure digesters and would like to see more research initiatives focusing on sustainable practices, such as the CARAT project.

In Dotter’s view, however, none of the candidates offered satisfactory plans to help the dairy industry. “We didn’t really single them out on agricultural issues,” he said.

He feels that Mastriano is “too right-wing”, but he nevertheless plans to vote “conservative” at all levels. Harbach too.

“I think you’ll find that 95% of working farmers will go the conservative route,” Harbach said. “And I’m no exception.”

Grace is a journalist who writes about climate change, science, agriculture and food systems. She is a graduate student in MIT’s science writing program and has a bachelor’s degree in biology and anthropology from Tufts University. Previously, she worked as a researcher, studying coffee growing in Costa Rica and the survival of honey bees in southern Wisconsin, where she grew up.

Reviews | What Abraham Lincoln Can Teach Politicians in a Polarized Time