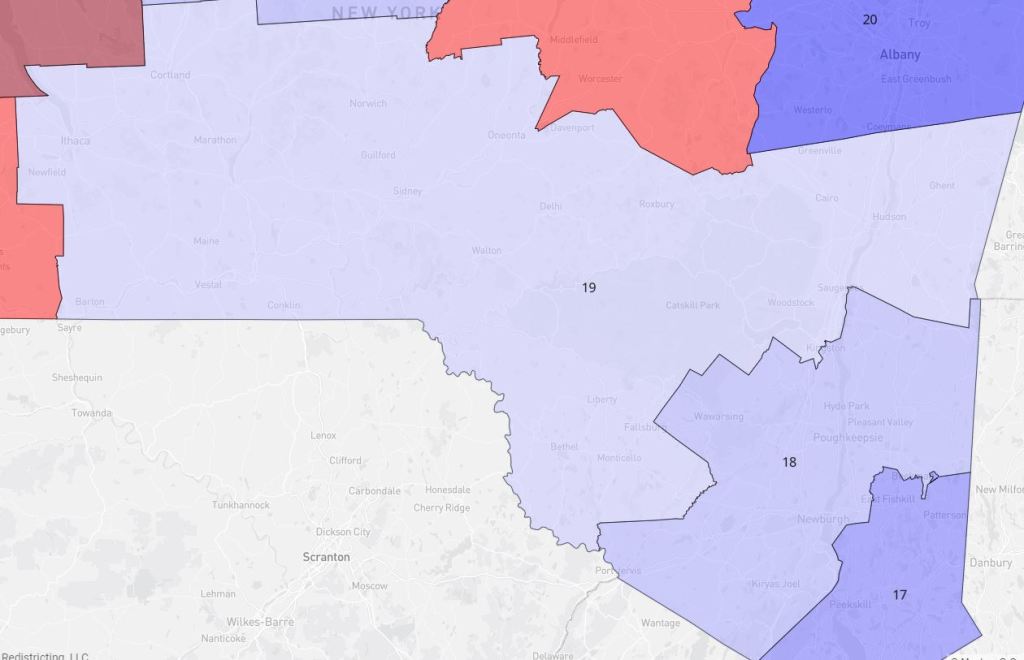 KINGSTON, NY — The final redistribution lines slightly improved Democrats’ chances of victory in the newly created 18th and 19th congressional districts in the Hudson Valley, though those districts remain staunchly competitive and a mid-sweep -mandate by Republicans is expected nationwide, whether Democrats can propel those advantages into election victories remains to be seen.

In the state Senate, the newly created 41st district also puts what had for years been a solidly GOP seat on the line, with longtime Republican incumbent Sen. Sue Serino, R-Hyde Park and state Sen. first-year Democrat Michele Hinchey, D-Saugerties, consolidated into a district that now includes central and northern Dutchess County, eastern and northern Ulster County, and all of Greene and Columbia counties.

The newly formed 19th District includes significant parts of the northern and western parts of Ulster County, including the village and town of Saugerties, the towns of Woodstock, Ulster, Kingston, Hurley, Olive, Woodstock, Shandaken, Hardenburgh and Denning as well as the western part of the town of Wawarsing and the village of Ellenville. The district also includes all of Greene, Columbia, Delaware, Sullivan, Chenango, Broome, Cortland, Tompkins, and Tioga counties and part of Otsego County.

In its current configuration, this district is the one that would have voted 52.3% for Biden and 47.7% for Trump.

The newly formed 18th District will include the City of Kingston and the Ulster County towns of Ulster, Hurley, Rosendale, Marbletown, Rochester, Gardiner, Lloyd, Esopus, Marlborough, Plattekill, Shawangunk, the Village and Town of New Paltz , and part of the Town of Wawarsing and Village of Ellenville, and most of Dutchess County, including all of North Dutchess as well as all of Orange County.

“We like to say the pendulum swings back and forth, but having that kind of percentage even though it’s going to be a worse year for the Democrats, I think the Democrats in the 18th and 19th (districts) have that advantage,” said said Democratic Elections Commissioner Ashley Dittus. “We’ll see if it holds.”

Complicating this year’s election confusion is the impending resignation of U.S. Representative Antonio Delgado from the current 19th congressional district. Delgado, D-Rhinebeck, who flipped that seat from Republican to Democrat in 2018 and won re-election in 2020, will step down from that position Wednesday when he is sworn in as lieutenant governor, creating a vacancy that will be filled by a special election scheduled for August.

Dutchess County Executive Marc Molinaro, who expected to face Delgado in the November general election, will instead run against Ulster County Executive Pat Ryan in the August special election for a term that will expire on December 31.