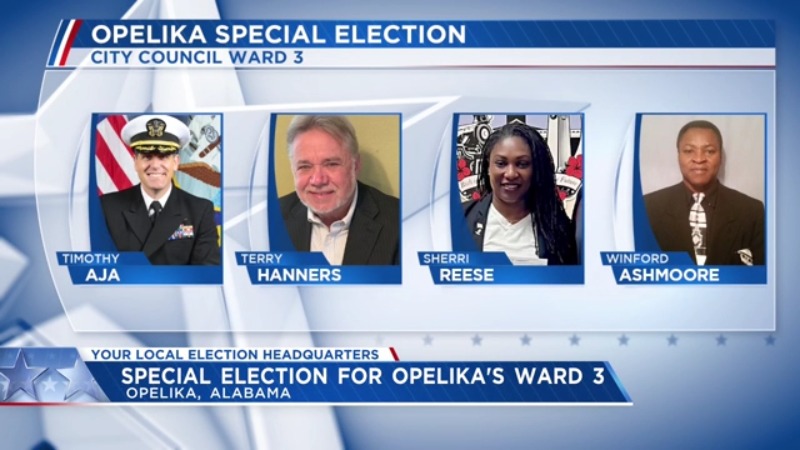 OPELIKA, Ala. (WRBL) – Voting booths open at seven a.m. Tuesday morning at the Denson Drive Rec Center for a special city council election. The election comes shortly after the death of former board member Dr Robert Lofton, who retired a year after his tenure due to his battle with ALS or Lou Gehrig’s disease.

Timothy Aja, Winford Ashmore, Sherri Reese and Terry Hanners are in the Tuesday ballot for the Ward 3 council seat in Opelika.

Aja, a Naval Reserve commander who taught ROTC at Auburn, owns an investment firm and is an Ambassador for the Chamber of Commerce. He and his wife have a daughter in schools in the city of Opelika. Problem solving and negotiation are his strengths.

Originally from Opelika, Winford Ashmore has been a 25-year PhD math teacher. Ashmore says helping solve problems in the classroom and in the community is her passion.

“Teaching has been such a rewarding career for me to watch the kids pick up on new concepts and watch the light bulb go out. I am the people’s candidate, and I will be very transparent, and their concerns are mine, ”Ashmore said.

Terry Hanners has lived in Opelika for 18 years. The West Georgia graduate and Navy veteran have three decades of corporate ownership.

“At city council, you don’t just make decisions for your neighborhood; you do it all over town. I’ve been in business all these years, then with my neighbors, trying to make a living and make that salary last. I am here for the citizens, ”Hanners said.

Sherri Reese of Opelika is a 24 year military veteran. Reese received her Masters and Athletics Coaching from Opelika High School. She has a teenage son and volunteers in her community.

“I have the skills to help the city. During my 24 years in the military, I worked with the Inspector General to get to the root of a problem and find solutions. As a drill sergeant, I’m used to standing in front and leading. In recruiting I’m used to selling my ideas to people, and being in the military I know how to take care of people, ”Reese said.

Closing of polling stations Tuesday at 7 p.m. News 3 will bring you the results as soon as they are available.