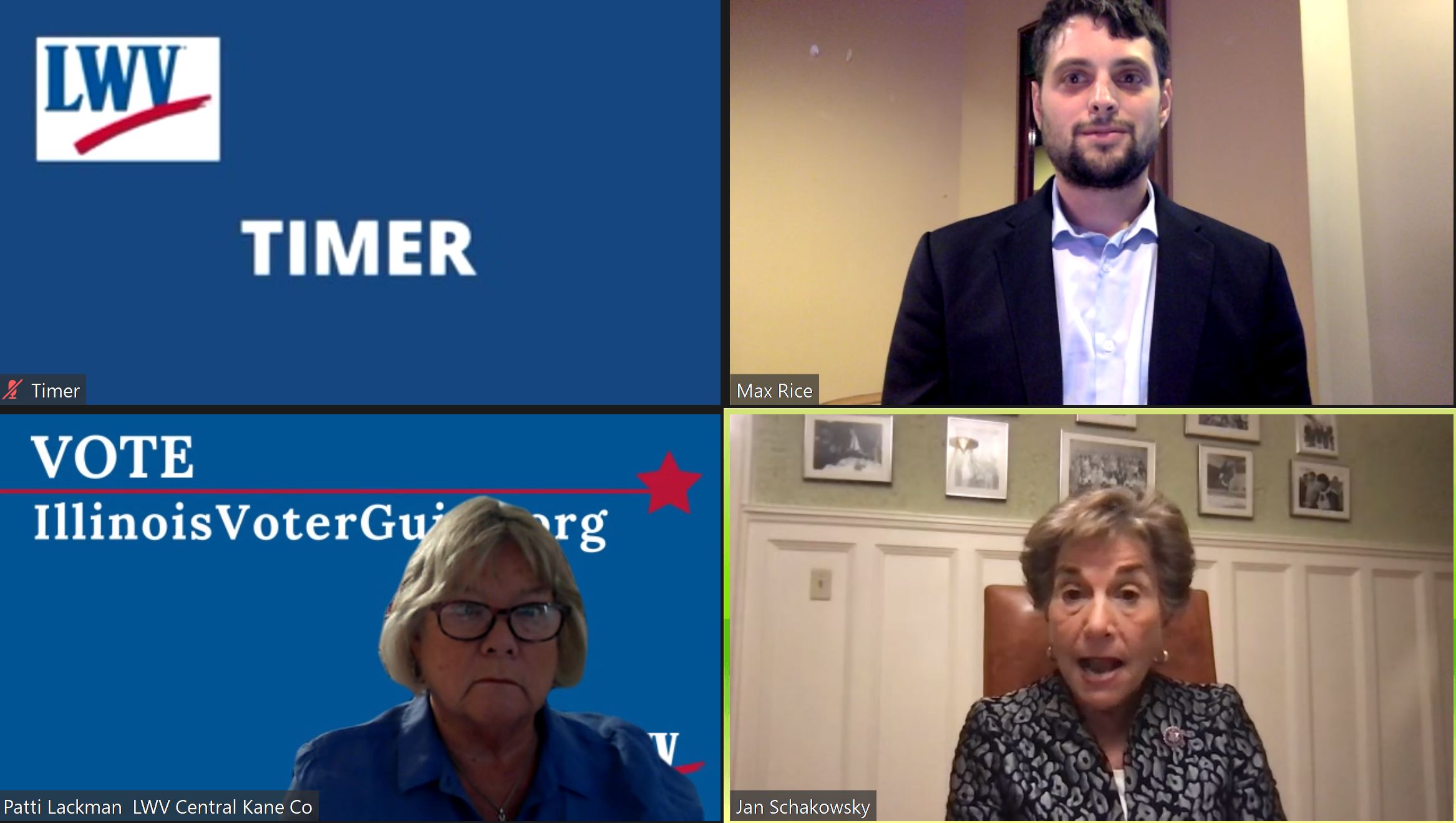 For those who think the election is still a long way off, residents of Evanston have until October 23 to register to vote in the november election.

The area’s congressional questions were the discussion between incumbent and longtime U.S. Rep. Jan Schakowsky (D-Illinois) and his Republican challenger Max Rice during a virtual candidates’ forum on Monday, Oct. 3. The discussion was co-hosted by the Evanston League of Women Voters.

Schakowsky has represented the district since 1999, after Sidney Yates decided not to run for re-election after his own nearly 50-year stint in the same position. Interestingly, she beat current Illinois Governor JB Pritzker in the 1998 Democratic primary.

Contrary to generations, opinions and political approaches, Rice is a millennial born in 1991 and a resident of the Rogers Park neighborhood in Chicago. He works as an energy consultant, according to his campaign website, and he ran unsuccessfully in the 2018 Republican primary for the ninth district.

This time around, he was the only Republican candidate in the primary ballot, giving him the chance to rival Schakowsky in the general election.

The district includes much of Chicago’s north side closest to Lake Michigan and a number of northern and extreme northwest suburbs, such as Evanston, Glenview, Skokie, and Cary. Below are highlights of what the candidates each discussed during the forum:

Schakowsky is known as one of the most progressive members of Congress and she serves as Vice Chair of the Congressional Progressive Caucus. She also chairs the House Subcommittee on Consumer Protection and Commerce, which reports to the Energy and Commerce Committee.

Speaking to the audience at Monday’s forum, she identified reproductive rights, safeguarding democracy and affordable health care as key issues in the 2022 midterm elections.

She framed the election by saying that Donald Trump’s baseless claims that the 2020 presidential election was stolen has prompted a number of conspiratorial, anti-democratic and election-denying candidates to run in local, state and federal this year.

“This election is a pivotal election right now,” Schakowsky said. “I think it’s an election that makes the distinction between are we going to have a real democracy where people have power, have freedom? And we want everyone out to vote. Reproductive rights can be safeguarded. We can ensure that all people have the rights and freedoms they deserve.

She also highlighted her support for universal health care for all and her vote just months ago in favor of a gun bill signed into law by President Joe Biden, the first major legislation on the use of firearms adopted by both houses of Congress in more than 30 years. years.

Schakowsky, however, said the gun bill fell short of the total ban on assault weapons she wanted to see.

Among other issues, Schakowsky spoke about the need for a comprehensive climate action and climate justice plan as the country increasingly grapples with heat waves and natural disasters. She described climate change as “an existential threat” to national security.

And she also touched on immigration reform, which has become a topic of local conversation with Texas Governor Greg Abbott, who ferried over a thousand migrants, most from South America and Central America, in Chicago over the past month. She called the current border situation a “broken system,” advocating for more established pathways to citizenship and a more welcoming national culture.

“We need to make changes, fundamentally,” Schakowsky said. “I am for health insurance for all, for universal health care for all. I’m all for affordable housing investment in this country, and there are so many strip malls right now that are down. These could be turned into mixed-income housing, low-income housing to give people a place to live.

Rice took part in the virtual forum at Galati’s Hideaway, an Italian restaurant in Cary, and he immediately attacked the Ninth District, saying he couldn’t understand how two places like Cary and Evanston could end up in the same congressional district. .

In his opening remarks, Rice also said his first decision, if elected, would be to give up his Republican affiliation to become an independent, and he described himself as “non-partisan”.

One of his main proposals, both according to his website and what he said Monday night, will be to restructure federal agencies by eliminating all unnecessary departments and positions and moving agency headquarters to locations in the country. Moving agency locations could have a positive economic impact on financially challenged communities, he said.

Asked about his position on abortion, Rice declined to give a specific answer, although he said he supported abortion rights in cases of rape and incest.

He said abortion should be a decision between a person and their doctor, but he also mentioned he would like to see some restrictions.

On the environment, he said the loss of topsoil and Illinois’ continued reliance on leaded water pipes are major concerns, and that the defense of clean energy and Clean water would be a top priority for him.

But his main topic of debate on Monday was crime and safety, and he argued that Schakowsky had made his life concretely worse by supporting Cook County State’s Attorney Kim Foxx.

Rice said “crime is legal” in Chicago and violent criminals are spared because of Foxx’s policies, and he described the city as the “wild, wild west”.

In her final statement of the evening, Rice called politicians such as Schakowsky a “soulless bunch.” He also said he continued to “hear the same lies over and over again” about democracy being at stake in this election, as Schakowsky had previously said, and he raised concerns about voter fraud that the Republicans have repeated in recent years. , despite little evidence of fraud.

“I think the two biggest things missing in politics are good intention and skill,” Rice said. “Looks like there are a lot of stupid people.”

Politician’s claim on cross-border travel after Congress not ‘baseless’