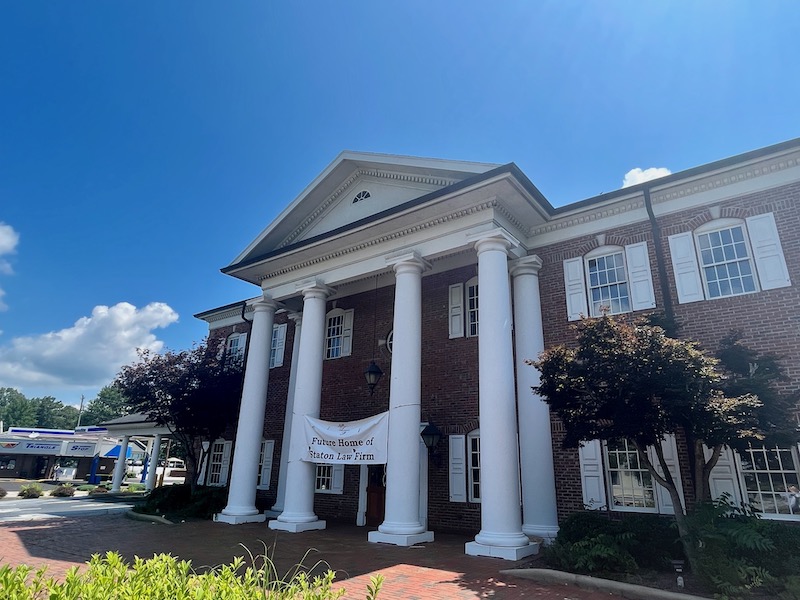 Q. Who bought the old Entegra Bank building on Main Street across from First Bank?

The new owner is Hendersonville attorney Whitney Staton (doing business as Sadie Mae Properties LLC). The building housed Macon Bank and then Entegra Bank, which was acquired by First Citizens Bank in 2020. The 8,136 square foot building, located on the corner of North Main Street and Seventh Avenue East, was once listed for $3 million. The Staton law firm acquired it for $1,865,000.

“We have outgrown our current building and the Macon Bank building has the space we will need and gives us room if we decide to expand in the future,” said Staton, who has always had a fondness for the 2 story brick colonial building. The new headquarters is three times the size of his North Washington Street law office. The plan is to move in as soon as the renovation is complete. “We will be the only occupants of this building at this time and there are no plans to rent any of the buildings,” Staton said. A native of Henderson County, Staton has been a practicing attorney for 11 years. His firm specializes in real estate law.

Q. Given the high cost of the proposed renovations to the Grove Street Courthouse, would the space occupied by US Representative Madison Cawthorn be offered to a future congresswoman?

Rep. Cawthorn leases 2,038 square feet of renovated office space in the Grove Street Courthouse for $18,600 a year, or $9.13 per square foot. It’s a bargain, as a comparable space in downtown Hendersonville can cost three times that amount. Tom Green, an NAI Beverly-Hanks broker who handles commercial sales and leases, said downtown leases range between $20 and $30 per square foot.

“The market is surprisingly strong for rentals and sales,” said Green, who recently entered into a 10-year lease for Optimum (formerly Morris Broadband) on a Main Street property that was the former McCarter Gallery.
County Executive John Mitchell said architectural plans were not yet precise enough to allocate courthouse space and added that some outlying county offices could return to the 1995 courthouse or find a house in the new six-story courthouse annex. “It is beneficial to the citizens of this county to have congressional offices in this building because of the breadth of services they provide,” Mitchell said. He said the lease is paid for by the federal government and therefore benefits county taxpayers. “The decision to have a regional office is between the new congressman and the county commissioners,” Mitchell said.
Rep. Cawthorn’s tenure runs until January 2023, when his term also ends due to his defeat in the May 17 primary election. This was not the first seat of the 11th congressional district in the courthouse. Former Rep. Mark Meadows rented a windowless office suite on the ground floor for $500 a month during his tenure from 2013 to 2021. Regional offices are typically staffed with six staff.
Mitchell said the courthouse project will be carefully planned.

“We’re not just going to give the architect a blank check and tell him to do it,” he said. “We will offer everything to reduce costs.” Yet the high cost of construction and renovation may influence the thinking of commissioners as plans for the courthouse develop and I suspect that future space in the 1995 courthouse will be reserved for court-related tenants . Architects estimate the price of the courthouse annex alone to be $53.3 million or $565 per square foot. At that price, space for regional congressional offices in the annex could cost upwards of $1 million.
By the early 1990s, when the county had long outrun space in the historic courthouse, planning for the new one was resentful. He seemed to dislike the judges, the attorneys, the sheriff, the district attorney, the deeds registry, and the court clerk. Additionally, the then Chairman of the Board of Commissioners strongly opposed raising taxes to pay for the building which was eventually constructed for a bargain price of $7.6 million. I suspect that by the time the $127 million courthouse and jail project gets underway, John Mitchell may have some gray hairs.