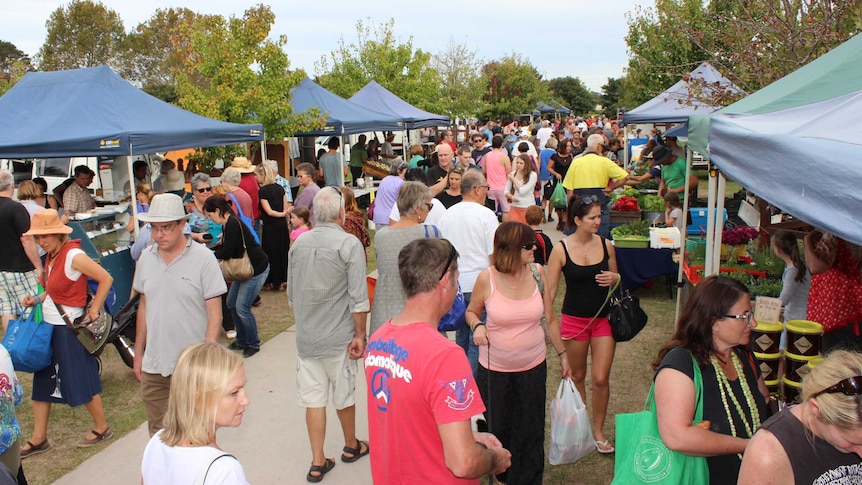 Federal election candidates appear at farmers’ markets, but some are voting to keep politics out

Radishes, organic kale and a long line at the coffee van are all familiar sights at farmers’ markets, but what about federal election candidates?

As the public date with the ballot box approaches, the visibility of political candidates is increasing in the marginal seat of the north-eastern Victorian state of Indi – but their presence at farmers’ markets is not always welcome .

Beechworth Farmers’ Market co-ordinator Darren Sutton said while the contestants ‘might see a good opportunity there’ he thought it was ‘a bit unfair to address people in a place they’ve been for relaxation and recreation and to maybe browse a few stores and buy something”.

Mr Sutton said the monthly market, operated under the Anglican parish of Beechworth, had taken an “apolitical stance”.

“We do not promote or support any political agenda and therefore we want to keep the market free from political promotion,” he said.

Mr Sutton said an email was sent to all electorate candidates asking them to ‘respect the fact that the Farmers’ Market is a market’ after a candidate tried to move into the main entrance and was asked to move on.

“The problem is if you let one group in, you have to let them all in,” he said.

“Then you end up with a Mexican stalemate at the entrance like you have on election day.”

Mr Sutton, a merchant, said he has noticed a growing political presence in several markets in the region.

Albury Wodonga Farmers’ Market chairman Frank Verduci said politicians and potential candidates have been growing in number over the past two years.

He said everyone was “welcome”, as long as they were locally relevant.

“Over the past five years [farmers’ markets have] took off in Australia,” Mr Verduci said.

“The market is booming, so I can see why they’re hot.”

“They use different marketing methods, which is good.”

Labor candidate for Indi Nadia David said the markets were an opportunity to “enjoy the crowds and get the word out”, but the “reception is often quite chilly”.

Ms David says opportunities to interact with voters in large regional constituencies like Indi – which stretches from Corryong to Kinglake – can be scarce.

“In my view, we shouldn’t try to round up candidates or try to protect the candidate community as if we were going to prey on people,” she said.

Zareh Ghazarian, senior lecturer in politics and international relations at Monash University, said the “value” of local markets was that they could “act as local community hubs”.

He said these were “areas of choice” for candidates.

“For voters who have already made up their minds or know who they are going to vote for, the value of these kinds of events is not great,” Dr Ghazarian said.

“But I think there is potential there for those who are undecided.”

In a fringe seat like Indi, he said he would expect to see “greater competition and more activity in terms of electoral competition”.

But it remains to be seen whether political campaigning can be successfully banned.

Mr Sutton said that although the response to the ban had been “pretty good”, there were “a few people wandering around wearing their political clothes” who did not appear to be shopping.

“Sometimes people push the boundaries of things a little more than we would like them to,” he said.