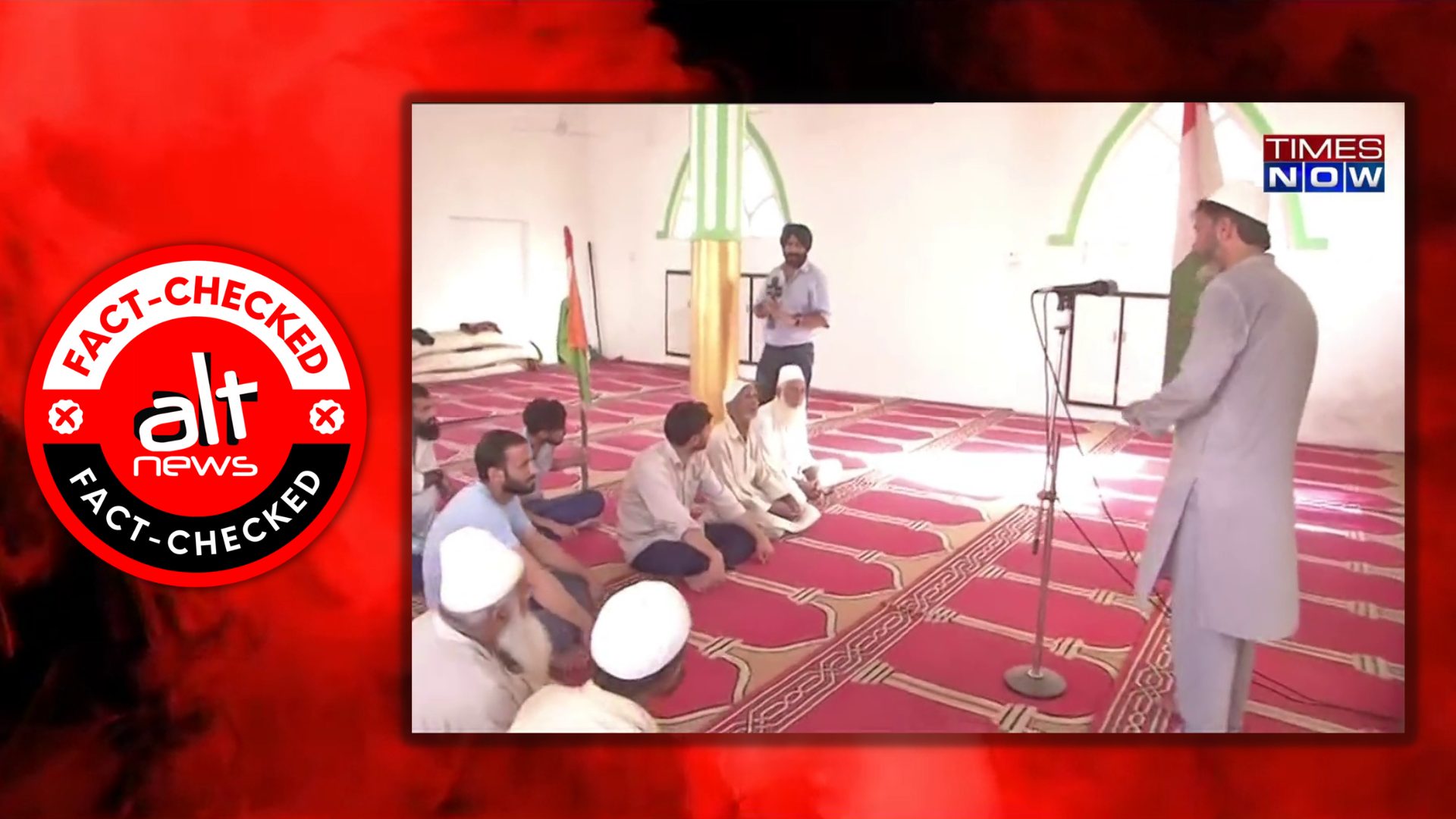 August 10, Time Now tweeted a video report by journalist Pradeep Dutta. The entire report is shot in the grounds of a mosque where an alleged cleric of the mosque can be seen speaking to a few attendees about the importance of the Indian national flag.

In the seven-minute video report, we see the Times Now reporter talking with the alleged cleric as well as the attendees, who listen to the sermons with great “enthusiasm.” A total of nine people are present, some of whom appear to be elderly people.

While talking to people in a mosque, a cleric from a mosque in Jammu tells people about the importance of Har Ghar Tiranga campaign and says go for #HarGharTiranga with zeal and enthusiasm.

The same report was also shot in Hindi and was tweeted by Times Now Navbharat on 10. In the Hindi report, the Times Now reporter calls the man “Maulana“. In this 2:20 minute report, the reporter asks the man if there is outside pressure on him or if he has to raise the flag. To which the man responds by saying that there is no pressure on him at the moment.

This video report has been shared twice (here and here) by Times Now Navbharat on August 12.

Looking carefully at the report, the following observations can be made:

These elements, when seen together, depict an unusual way of reporting a public event.

Local politician, not a cleric

We looked at the comments under the Times Now tweets. A reply with user Asif Iqbal Butt was noticed. The user wrote in bulleted form alleging that the man seen in the video report is not a cleric but someone affiliated with a political party. In a sequel Answerthe user also hinted that the video is from Doda district in Jammu.

Taking this clue, we contacted a few local journalists who identified the alleged cleric as a local politician. According to journalists, the man seen in the video is Mohammad Rafi Sheikh alias Pinka and he works for the Jammu and Kashmir Apni Party (JKAP). They also told us that the Times Now video report was shot in the Hidayi Phagsoo Jama Masjid (جامع مسجد ھدای پھگسو).

To dig deeper, we did several keyword searches on Facebook and came across stories featuring Mohammad Rafi. A November 2021 report mentions Rafi as the “general secretary of the APNI party bloc”. In an interview with September 2021Rafi can be seen standing next to J&K Apni Party Supreme Altaf Bukhari.

Alt News reached out to Mohammad Rafi Sheikh to find out what happened behind the scenes. Speaking to Alt News in a phone call, Rafi admitted he was a local politician affiliated with JKAP. “I am neither a cleric, nor an imam, nor a scholar, nor a member of any mosque,” ​​Rafi said.

Rafi also alleged that the Indian army and the Times Now reporter forced him to hoist the flag inside the mosque and deliver these sermons. We also spoke with Abdul Kabeer (red box below), the imam naiyib (assistant cleric) who was present at the mosque at the time of the shooting. He agreed with the statement given to us by Rafi.

Alt News also came across a twenty-six-minute interview given to the Chenab Times by residents at the mosque. Rafi and the imam naiyib also speak during this interview. They reaffirm having been forced by the army to hoist the flag inside the mosque.

“On the evening of August 7, a policeman came to my house and asked me to pose with the flag. He told me that I am an OGW (Over Ground Worker) and that I have to comply, I did as I was told. The next day, August 8, army officials called me and asked where I was. I told them I’m home,” Rafi said.

He added: “The next time they called me I was sitting in my friend’s tailor shop near my house. They came to the store and took me and my friend aside. We were told to talk about the national flag, so we accepted… They gathered a few people and told us to talk about it inside the mosque… We were all reluctant but we complied.

Alt News spoke to tailor Shafqat (green box below) who was there with Mohammad Rafi. He corroborated Rafi’s claim. “We are villagers, we don’t know what is going on between the army and the OGW. I saw the army and I was scared, so I did as I was told,” Shafqat Hussain said.

An army man is indeed visible in the Times Now English report at minute 3:15. According to a local, it is not common for the army to stand in front of the mosque. Alt News contacted senior army officials stationed in Phagsoo, but they refused to speak officially and asked us to contact the army PRO. The PRO’s response was that they were unaware of such developments.

We also came across a facebook live where to talk to the journalist Shakeel’s Raja, a local politician says an army major told him it was Rafi’s idea to shoot the video inside the mosque premises. The politician also claims to have spoken with Pinka, with Pinka stating that he did what he did under duress. [Watch from 3:10 minutes.]

Alt News has reached out to reporter Pradeep Dutta for his comments on the allegations made by Rafi and others at the scene. Dutta disconnected our call and did not respond to our messages. The story will be updated if and when Pradeep decides to address these allegations.

Although there are differing accounts on whether the raising of the national flag inside a mosque in Phagsoo was an act of coercion, it is clear that Times Now misrepresented a local politician as a cleric in his show. Mohammad Rafi Sheikh alias Pinka is not a cleric or scholar of the mosque. He is a politician affiliated with the Jammu and Kashmir Apni Party (JKAP).

Donate to Alt News!
Independent journalism that speaks truth to power and is free from corporate and political control is only possible when people contribute. Please consider making a donation to support this effort to fight misinformation and disinformation.

To make an instant donation, click the “Donate Now” button above. For more information on donations by bank transfer/cheque/DD, click here.