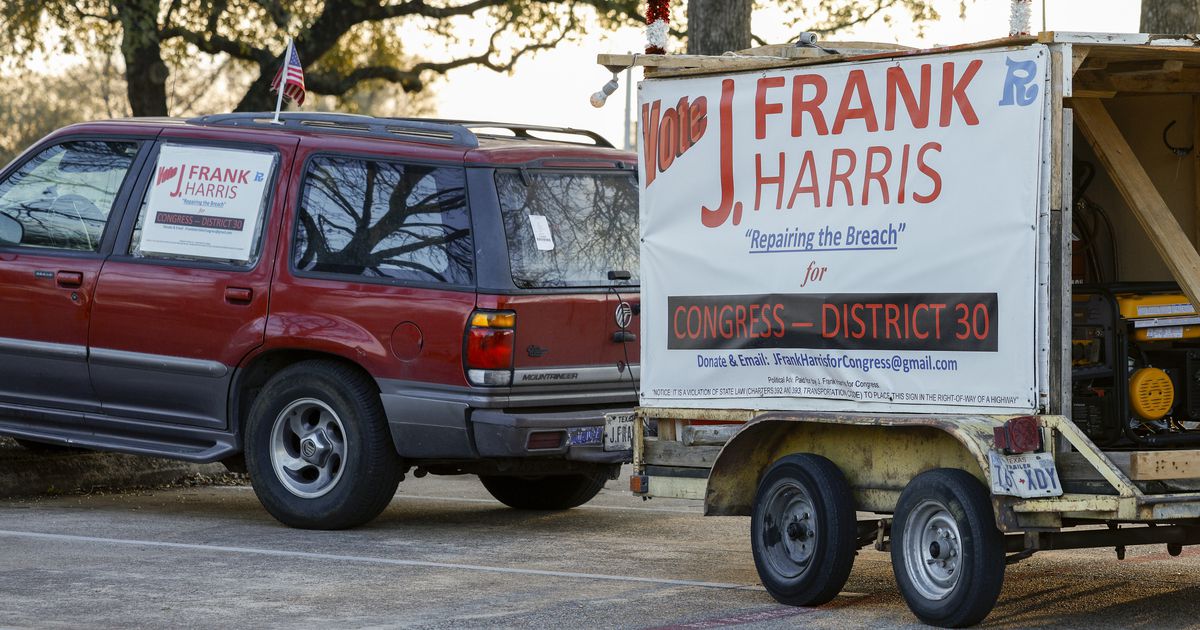 The candidates who picked up their placards saw James Frank Harris putting numerous campaign signs and their wooden and metal pickets into his vehicle on the afternoon of March 3, Grand Prairie police said.

Officers arrived at the 4700 block of South Carrier Parkway and found Harris with a trailer full of campaign signs and stakes. He was arguing with at least two witnesses, and part of the exchange was captured on video and posted on social media.

“Upon arrival, officers made contact with two separate victims who had traveled to the area to collect their campaign signs,” said Mark Beseda, a public information officer with Grand Prairie Police. “When they arrived, they observed that their placards were taken and placed in a vehicle without their consent.”

Harris, a DeSoto resident, had the signs of numerous other candidates, and he could face additional charges, Beseda said.

The Dallas County GOP is aware of the arrest and has made it clear that it does not condone such actions.

Reached Wednesday by The Dallas Morning NewsHarris said he compiled a list of candidates who lost and only collected signs from them because he thought they wouldn’t need them.

Harris said he plans to use the stakes for his signs in the run-off election and, if he advances, in the general election in November. In all, he estimated he collected about two dozen stakes.

Harris said he thinks candidates often leave their signs with city staff to put in the trash.

“The city usually picks them up and throws them away itself. The (candidates) very rarely come out and pick up their signs,” Harris said.

He said he didn’t believe what he did constituted theft because the signs were in public places, not on someone’s private property. Some of his own placards had already been collected before he started collecting them two days after the election, he said.

“I didn’t steal signs. I was just taking signs that the city was going to take,” Harris said.

He wasn’t upset that someone seemed to have picked up some of his signs. They beat him to it, he reasoned.

“Some of my placards were taken and destroyed. There’s nothing I can do when they’re in the public domain,” Harris said.

He said he believed the only reason he was in trouble was because he was a Republican. 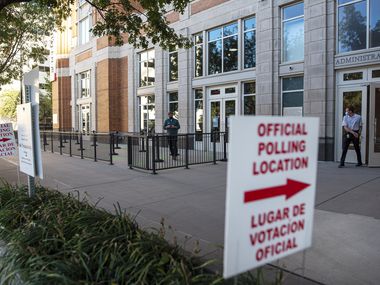 “If I was a Democrat…it wouldn’t have been a problem,” Harris said.

Harris said he has no intention of dropping out of the race.

“I’m the favourite. That’s why they want me out…I’m a thorn in their side,” Harris said.

Signs and their wooden, metal, or wire posts can be expensive, so they are often reused by candidates and political operatives.

Typically, cities give candidates a window of time after an election to gather their campaign signs. Eventually, code enforcement officers are dispatched to remove any persistent campaign material that residents consider an eyesore. In some cities, code enforcers will try to recruit candidates before confiscating their signs.

In Grand Prairie, the procedure is for code enforcement officers to call candidates and ask them to collect their signs. If they don’t, officers pick up the signs and store them, Beseda said.

Angela Luckey, one of the witnesses to the incident, recounted The news that Harris was determined to keep the signs he took, telling police he was entitled to them because the March 1 primary was over.

“The police allowed us to remove our items from his truck and allowed us to press charges against him,” Luckey said. “It was really weird.”

Harris said he also met with Dallas County Family District Judge Kim Cooks, who objected to him taking his signs.

“I pulled up next to him and said, ‘What are you doing? You’re a thief. I saw you stealing signs,'” Cooks said The news. “He was like, ‘You have to prove these are your signs.’ So I said, ‘No, I’m calling the police because you’re stealing.’ Then I just stopped in front of him and he couldn’t leave.

Cooks said she didn’t know Harris or that he was a Republican candidate for Congress until she saw him take his signs in Grand Prairie.

Harris is in the May 24 GOP runoff for the District 30 congressional seat against James Rodgers. He finished slightly ahead of Rodgers in the March 1 primary.

District 30 is one of the most heavily Democratic districts in the country, so Johnson’s eventual replacement will likely be determined by the Democratic Party’s runoff between state Rep. Jasmine Crockett and the former chief of staff. of Congress Jane Hamilton. When he was arrested last week, Harris had campaign signs that belonged to Hamilton and Crockett, witnesses said.

Though he’s unlikely to win Johnson’s seat, Harris’ theft charge is embarrassing for local Republicans looking to gain ground in Dallas County, one of the bluest counties in the Texas.

Dallas County Republican Party Chair Jennifer Stoddard-Hajdu said she heard about Harris’ arrest but had no contact with him. Harris filed for the race in Austin and did not meet with the local GOP before or after his arrest, Stoddard-Hajdu said.

“We certainly don’t condone actions like this, and it’s not something we want our candidates to do,” she said.

The party does not believe his arrest will impact his ambitions to claim the seat. Although the local party does not endorse the candidates, Stoddard-Hajdu stressed that Republicans have options.

“We certainly think James Rogers is a fantastic candidate and would do a great job in District 30,” Stoddard-Hajdu said.

She also noted that the charges against Harris are, at this point, only allegations. It could be a long time before a decision is made on whether there is enough evidence to prosecute him and secure a conviction.

According to his campaign website, Harris has been active in Dallas-area politics for more than two decades.

“Many of our constituents have a conservative bent, and we believe in faith, family and freedom,” Harris says on his website. “These are elements of the RNC platform. Although it’s not perfect, I want to be an instrument to help all people have an equal opportunity to achieve their goals without undue hardship imposed on them by government or cultural constraints.

Harris, whose bio states he made a career out of community youth diversion programs, added that he “wanted to align himself with those who applaud God and not boo him like with the Democratic Party.”