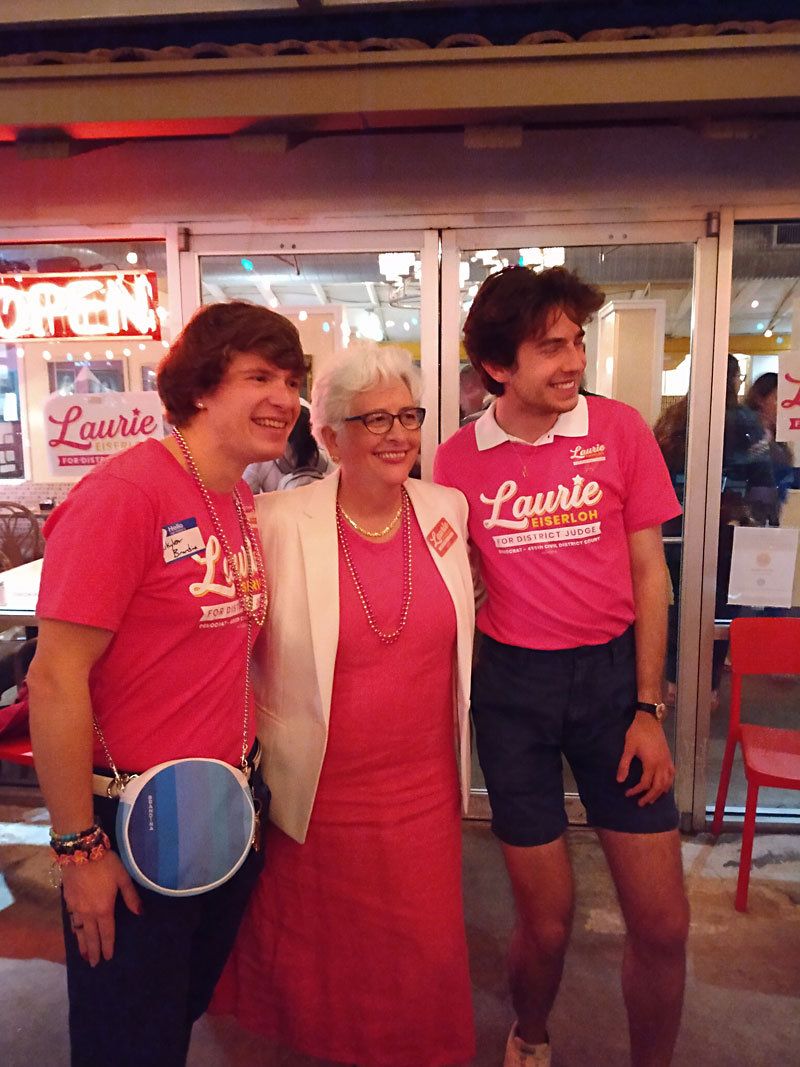 It was a happy vibe at Santa Rita Cantina on Tuesday night. When the early voting results were released at 7:30 p.m., the three judicial candidates hosting their watch parties at the Mexican restaurant in Rosedale knew they had won their primaries, which, being Austin, meant they had also won. their elections.

Laurie Eiserloh, with her Ann Richards hair and an even more attention-grabbing white jacket, moved through the crowd like a rock star. Everyone she met – literally – wanted to spend some time with her. Winning the primary for the newly created 455th District Court with 86% of the vote may have been part of the attraction. (Eiserloh will face the GOP appointee to that civil court, Cleve Doty, in November, but it’s just a formality in the deep blue of Travis County; the rest of the judges will be unopposed.) She spoke with the the Chronicle on the importance of the district courts in Travis County: “I was the director of the Texas Lesbian and Gay Rights Lobby in the early 1990s and we relied on the civil district courts, just like Austinians the are doing now, to protect us from the Texas Legislature.”

Brandy Mueller is another judge who won her primary to leave, with 82% of the vote for the 403rd district court race to succeed Brenda Kennedy on this criminal court bench, and will now be able to implement something like the Project Engage diversionary program for young offenders she started 12 years ago in Law 6 County Court. Daniela DeSeta Lyttle won the 261st District Court’s race to succeed Lora Livingston, and the incumbent Chantal Eldridge will retain her seat on the 331st District Court.

Rounding out the district court races, Catherine Mauzy knocked out challenger Madeleine Connor – who is already a judge in another civil district court – with 74% of the vote. Mauzy was one of those celebrating in Santa Rita on Tuesday and, while she’s not interested in getting into an in-depth discussion about her opponent – who appears to have run against Mauzy as part of a personal vendetta – she did. allowed observation. “I will say this: If you’re running for office, you should run and tell people why they should vote for you. And she didn’t. She didn’t answer why she wanted to run.”

It was a good night for any judge who received the the Chronicle‘s, with the editorial board going 11-for-11. Each of the County Court at Law race winners received over 60% of the vote: Dimple Malhotra in CCL 4, Mary Ann Espiritu in CCL 5, and Denise Hernández in CCL 6. In the lone race contested in a higher court, Rosa Lopez Theofanis finished 49% and was forced into a runoff with Beth Payán for (almost certainly) a chance to topple the last seat held by the GOP on the 3rd Court. call.

In the Justices of the Peace races, incumbents Yvonne Williams and Nick Chu each won hands down. (The other three local justices of the peace were unopposed.) Chu was one of the celebrants on Tuesday, along with his wife, Kathryn, and their infant son, born the day Chu announced his re-election run. “My big thing next quarter is going to be giving out free lawyers for people who can’t afford them, for eviction cases,” Chu said. “Right now it’s only available to a handful of courts here in Travis County. I want to roll this out across the region. Now I have another four years to do that.”

Do you have something to say ? the the Chronicle welcomes opinion pieces on any topic from the community. Submit yours now at austinchronicle.com/opinion.

What happened to loans between individuals?