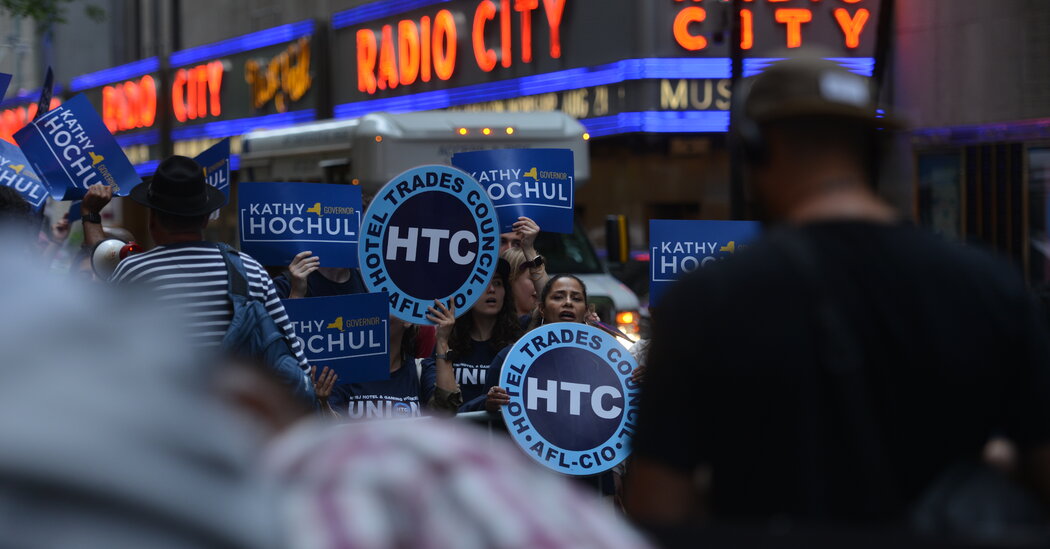 Hello. It’s Friday. We’ll look at last night’s heated debate between the three contenders for the Democratic gubernatorial nomination. We will also discover a large-scale musical work that was interrupted during a radio broadcast a long time ago. It will be played tonight in anticipation of Juneteenth.

“Excuse me, I’m giving an answer,” Hochul said at one point when Suozzi tried to cut him off.

“Governor? Governor? Governor?” Suozzi asked impatiently another time. He was trying to force Hochul to look his way after she slammed him for praising Florida’s ‘Don’t Say Gay’ law prohibiting teachers from instructing on gender identity or sexual orientation – a comment he has since retracted. Hochul kept his eyes on the camera.

The tangle continued as Suozzi claimed she had spent Covid relief money “irresponsibly”. Williams complained that Hochul found money for a stadium for the Buffalo Bills, but not to address gun violence. Suozzi attacked Hochul for receiving National Rifle Association endorsements a decade ago when she was in Congress.

“She says she’s moved on,” Suozzi said. “The only thing that has changed is the governor’s political ambitions.”

When Hochul said she would not raise taxes, Williams countered that “this line of not raising taxes is a Republican line meant to protect wealthy donors.”

It was the second time that the three candidates faced each other. In their first appearance together on June 7, neither Suozzi nor Williams seemed to change the direction of the race. My colleague Nicholas Fandos writes that there were signs after Thursday’s encounter that Hochul had been bruised, but there was no suggestion that Suozzi or Williams had changed the dynamics of a race heading into its home stretch. Early voting begins on Saturday and will continue until June 26, two days before the primary.

Hochul, who has raised more than $30 million in campaign contributions — far more than Suozzi or Williams — has defended many of his administration’s efforts as works in progress. She touted working with Mayor Eric Adams to “give people that sense of security” and protect those with mental health issues.

But Suozzi did not give in. “We hear the governor’s talk about ‘we’re spending money on this, we’re going to get there,'” he said. “Under this administration, they are no safer.”

Suozzi threw his hat in the ring as a centrist determined to cut crime and taxes, and on Thursday he said he would cut state income taxes by 10%. Williams has repeatedly tried to tie Hochul to former Governor Andrew Cuomo, who selected her as lieutenant governor in 2015 and whom she replaced when he resigned last year.

Expect a partly sunny day with highs near 90 and a chance of showers and thunderstorms in the afternoon. At night, it’s mostly clear with temperatures in the mid-60s.

After being stuck between a subway train and the platform, a passenger dies

Maybe your briefcase or purse got stuck when the doors closed in the subway car you just squeezed your way into. Or maybe your foot rotated just enough to get stuck between the train and the platform as you descended. For a terrifying second as you took your foot out of space or pulled your briefcase or purse onto the train, you thought about the nightmare that could have been.

That nightmare apparently unfolded in Brooklyn late Wednesday night when, according to the Metropolitan Transportation Authority, a subway passenger became trapped between a car on a Q train and an open-air platform at a train station and is fell on the tracks. The passenger, identified as Marcus Bryant, 37, was pronounced dead shortly after midnight Thursday.

Police officials said Thursday morning that testimony suggested Bryant’s clothes got caught in the doors as he exited the train at the M Avenue station in Midwood, Brooklyn. But Richard Davey, president of New York City Transit — the MTA division that oversees the subway — later contradicted those accounts, and police said they would defer to the MTA.

The MTA said the station’s cameras were working at the time. But the agency declined to release footage as its investigation was still ongoing.

In anticipation of June 19

Late one Friday night in May 1937, during the height of network radio pre-television, the broadcast of a concert from Cincinnati unexpectedly ended. The reason was not technical difficulties. “We are sorry, indeed,” intoned a deep-voiced announcer as NBC interrupted, “but due to prior commitments, we are unable to stay for the final moments of this excellent performance.”

“No one can explain why,” said Liz Player, founding executive director and artistic director of the Harlem Chamber Players, who will perform a performance of the play that was discontinued at Riverside Church tonight ahead of the June 19 holiday. “There are people who surmise there must have been racist objections” from listeners because the piece – “The Ordering of Moses” – was written by a black composer. “But there is no proof,” she told me. “These are just suspicions.

The composer was R. Nathaniel Dett, whom author and critic Joseph Horowitz described as part of the “substrate of American classical music that quietly coexisted with the glamour” of white conductors like Arturo Toscanini and star performers like Vladimir Horowitz.

Why the Cincinnati May Festival show ended the way it did may well remain a mystery. James Conlon, the music director of the Cincinnati Symphony Orchestra from 1979 to 2016, told me that “there doesn’t seem to be any other explanation” than complaints that Dett was black. But like Player, Conlon said there was “no definitive authority” for that conclusion.

Tammy Kernodle, a musicologist who was associate editor of the Encyclopedia of African American Music, was familiar with the piece but not the story that the broadcast was cut due to listener objections. “I can’t believe it, and I’ll tell you why,” she told me. “There was too much music by black composers and black musicians played on the radio in the 1930s.” And it’s possible that representation in Cincinnati may have fallen behind, a no-no in the time-conscious broadcasting world.

Player noted that Dett’s oratorio told the biblical story of Moses leading the Jews out of Egypt after a series of plagues. “I hope this will be a foreshadowing of our own exit from the pandemic,” she told me. “I love that Dett takes the witty ‘Go Down, Moses,’ which is also a message of black liberation, and weaves it throughout the oratorio.”

I was going down the service elevator in my building with Mike, the elevator operator.

Suddenly he stopped at one of the lower floors.

When the door opened, he held out his hand.

An older woman standing there reached out her hand, holding a jar she apparently couldn’t open.

Mike took the jar, opened it and returned it with a smile.

He closed the door and we continued down.