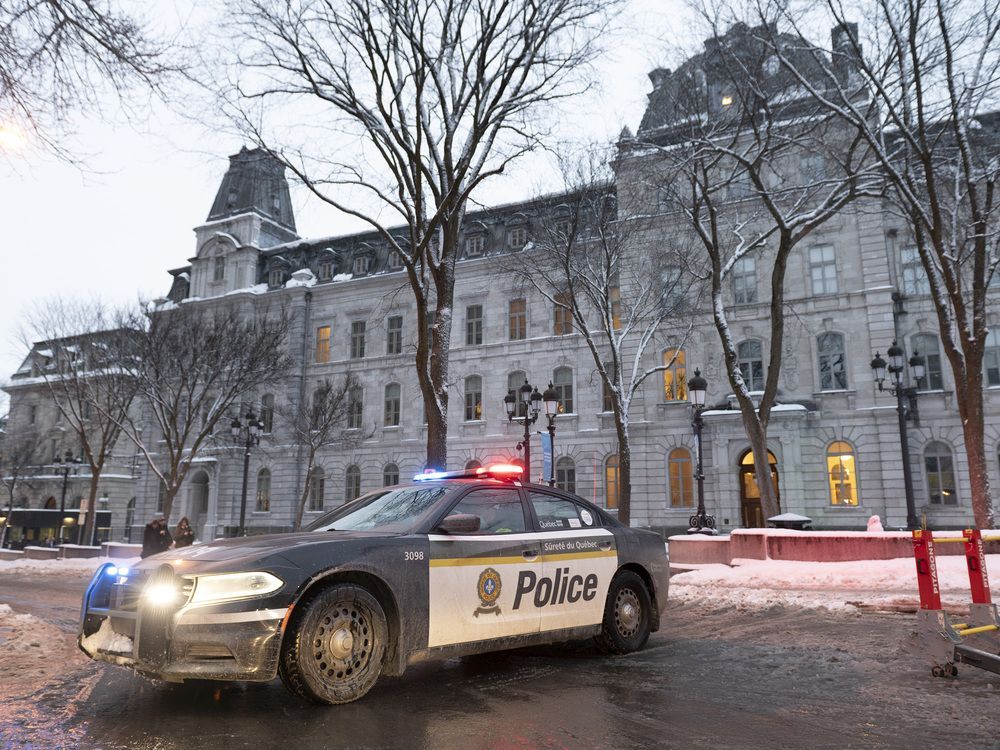 QUEBEC CITY — Residents of the provincial capital woke up Friday to the magical sights and sounds of their annual Winter Carnival — and a truck convoy demonstration.

Despite the snow and temperatures of minus 13, the first trucks – many carrying a combination of Quebec and Canadian flags on the back – began to arrive around 6:30 p.m. Thursday. The first convoy to arrive left from Sept-Îles.

Truckers say they want to show solidarity with protesters in Ottawa and are fed up with the COVID-19 pandemic measures imposed on the population by the federal and provincial governments. The demonstrations began as a protest against a vaccination mandate for truckers crossing the Canada-US border.

But unlike the lockdown in Ottawa, the situation here is far from everyone’s game. The boulevards and secondary streets around the buildings of the National Assembly — their main objective — were closed by the municipal police and the Sûreté du Québec.

In some cases, large municipal street sweeping vehicles were strategically placed on the streets to prevent truckers from setting up near the Legislative Assembly and the Carnival site.

Thursday evening and again Friday morning, there were more police present than demonstrators. The police were all wearing medical masks. As of 10 p.m. Thursday, police had issued 15 tickets for various municipal and traffic violations.

While a few heavy trucks were allowed to park on René-Lévesque Boulevard, which runs along the campus of the Legislative Assembly, most protesters were in pickup trucks and had difficulty parking. Nearby Stoneham has become a gathering point as many more protesters are expected to arrive on Friday.

If their goal is to meet politicians, they will quickly realize a harsh reality: the Legislative Assembly does not sit on Fridays, so MLAs have gone home to their constituencies. Unlike the protests in Ottawa, no MPs agreed to meet with the group.

MPs who represent local ridings in Quebec City have been ordered to avoid the legislative campus, which is locked down by internal security. As part of a recent $90 million renovation, security at the Legislative Assembly is now state of the art.

In the nearby historic Old Quarter, restaurants that were allowed to reopen on Monday with the easing of some pandemic restrictions planned to stay open and expected carnival traffic. The same goes for hotels. The popular annual winter festival opens on Friday.

The magical Ice Palace of Bonhomme Carnaval is located just opposite the legislature, but access is pedestrian, in keeping with the festive atmosphere.

To avoid any incidents at the Quebec Cenotaph, which is inside the security perimeter, several veterans have volunteered to stand guard to keep the crowds away from the site.

During a press conference in Sherbrooke on Thursday, Premier François Legault had a message for the movement.

“We were clear,” Legault said. “Yes to protest. No to chaos and not to prevent citizens from going about their business.

Legault said that after the long pandemic, citizens deserve to have fun at Carnival.

“I have no problem seeing people on the street say what they want, but I want a normal life to be possible. That includes the children who go to the Carnaval de Québec.

Sign up to receive daily news from the Montreal Gazette, a division of Postmedia Network Inc.

Thank you for your registration!

A welcome email is on the way. If you don’t see it, please check your spam folder.

The next issue of Montreal Gazette Headline News will soon be in your inbox.

We encountered a problem during your registration. Try Again