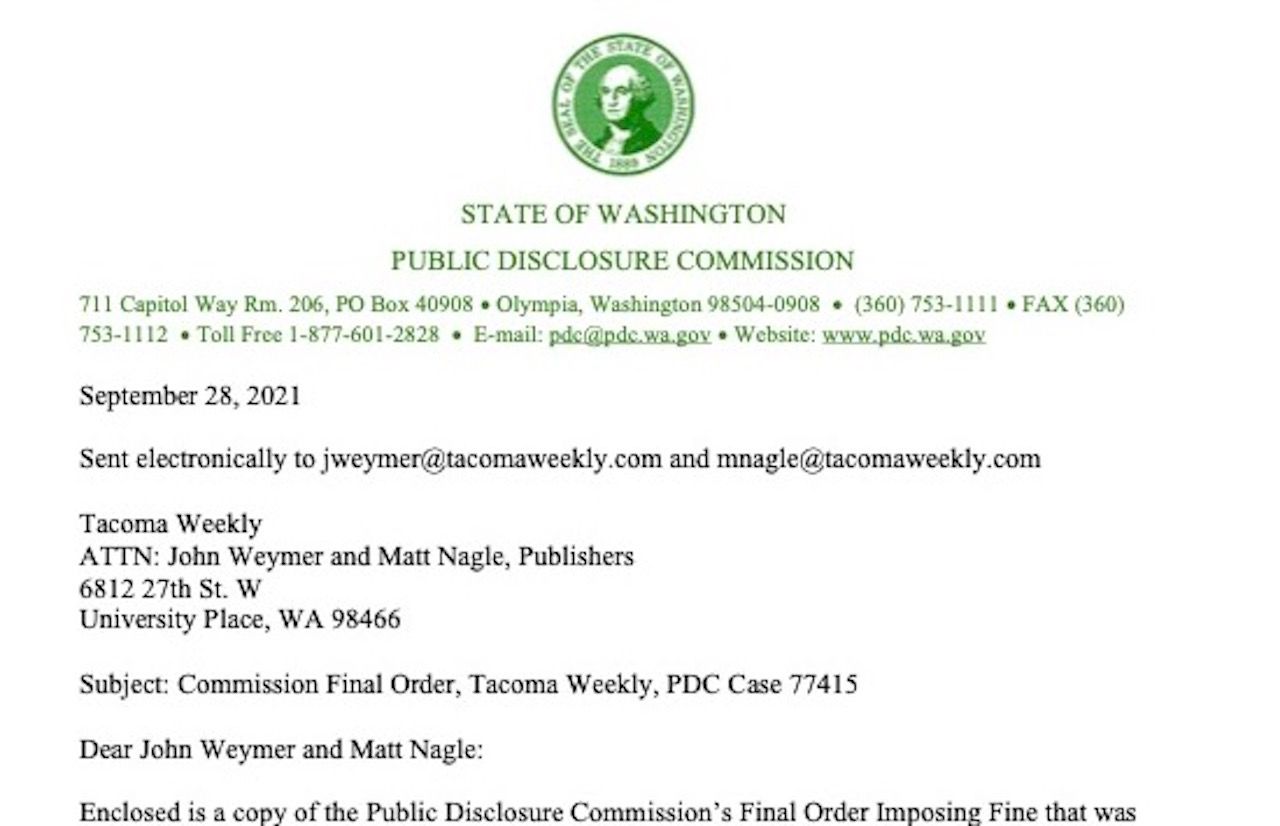 For nearly 40 years, Tacoma Weekly has been a source of information on local events, people and places in our city – news residents can’t get anywhere else. Our job is to serve the community, telling the stories people want to read to be better informed and bring a sense of unity to Tacoma’s diverse human landscape. We can’t compete with the Internet or TV, and we don’t try. We know who and what we are, and we pride ourselves on serving in our unique way.

The Tacoma Weekly has a long history of political friendship with elected politicians and promising candidates. Those in office know that a simple phone call gets them coverage of their accomplishments, and young applicants who are just starting out know that we can give them the opportunity to tell their story. These articles that we write are the means of delivering information to the public in the candidates’ own words, without filter and without bias, which is extremely important for a properly informed electorate.

In the 2020 election, Tacoma Weekly emailed 28 local candidates after the primary offering them an advertisement that was described in an attached promotional flyer. We weren’t sure anyone would respond as the newspaper industry has had declining revenues for years, but we received our first responses from Javier Figueroa, Jason Whalen and Elizabeth Kreiselmaier. We also sold advertising to Ed Troyer, Marilyn Strickland, T’wina Nobles and Sarah Rumbaugh.

As we negotiated the contracts, we realized that editor Matt Nagle had attached the wrong flyer to the emails. We had created three versions and the third and final version was the one he was to use as it was the result of working on our ideas from the first two drafts. However, all three were given the same filename and unfortunately the first mockup was sent which included “Editorial Weekly” and “Approval” in the list of what was on offer. We quickly emailed our list of candidates with the correct flyer attached and explained what happened before the contracts were signed for display only advertising.

Here’s a breakdown of what each candidate bought:

Kreiselmaier: 50 units of print advertising, one block of website advertising for 12 weeks, and four newspaper box wraps, for a total of $ 2,500.

Troyer: Website advertisement for 2 weeks at $ 400, banners at $ 140 for graphics services and two half-page print advertisements at $ 330 each.

None of these candidates signed contracts for paid items or promotions because that was not what we were offering. We had already planned to interview and write about a number of candidates for this election and we did about Kreiselmaier, Figueroa, Whalen, Rumbaugh, Hans Zeiger, Ryan Mello, Doug Richardson, Cyndie Fajardo and Ed Troyer.

We didn’t know we had done something bad by issuing the wrong flyer, and neither did the candidates. It was just an honest mistake. Then we got an email from Whalen stating that “… the local Dem party is very concerned about the idea that I (and / or Javier)” bought “Tacoma Weekly endorsements.”

Taking our initial and incorrect leaflet, Evelyn Fielding Lopez and Lucas Byram filed complaints with the Public Disclosure Commission against Figueroa, Whalen and the Tacoma Weekly. The basis of their complaints was that we intended to sell our endorsement, which was wrong and never happened.

It’s worth noting that Lopez and Byram turned on us after writing about Republican candidates Figueroa, Whalen and Kreiselmaier, as Byram and Lopez are both active Democrats and party watchdogs. Byram backed Democratic candidate Ryan Mello in the 2020 election and last month he filed a PDC complaint against Tacoma mayoral candidate Steve Haverly, who identifies as independent, for failing to file a $ 200 campaign contribution within five business days of receipt. Haverly is running against Victoria Woodards, a Democrat.

Lopez was formerly the executive director of the PDC, appointed on October 1, 2015. During her tenure, Republican leaders in the state demanded her resignation, accusing her of pro-Democrat bias, and she was the subject of of a complaint by the PDC for dismissing a complaint against a Democratic candidate for the legislature. The Port of Tacoma, the Tacoma-Pierce County Chamber and the Tacoma-Pierce County Economic Development Board, which were investigated by the PDC in 2016 for a voting problem, also had problems with Lopez and wanted her to recuse herself from the investigation. She resigned her position as PDC in May 2017.

After reviewing the complaints filed by Lopez and Byram, PDC staff held a brief telephone hearing with us on November 23, 2020, during which we explained what had happened. The staff members praised the Tacoma Weekly, thanking us for doing a great job and staying in business and letting us believe the matter was settled. We were not informed until eight months later that the investigation was continuing the following year. On August 18, 2021, we received a stipulation from the PDC that the Tacoma Weekly was accused of soliciting money from Figueroa, Whalen and Kreiselmaier in return for an endorsement, article or other. communication promoting them in Tacoma Weekly.

We were then informed that the PDC Commission would hold an enforcement hearing on September 23 into the allegations to determine whether actual violations have occurred and, if so, to assess the penalties. At this point, we were baffled as we thought the PDC was happy after the 2020 hearing and we were unsure why the investigation continued into 2021.

During the hearing, the Commissioners themselves seemed confused and uncomfortable. When we asked if their legal adviser who was present, Chad Rollins, was from the attorney general’s office, commission chairman Fred Jarrett replied that Rollins is on staff at the PDC as an attorney for the agency. Then PDC executive director Peter Lavallee stepped in to correct Jarrett and confirm that Rollins is an assistant attorney general. It was unusual for a lawyer from the GA office to be the PDC’s legal adviser for this case as he noted that there were no historical cases comparable to ours for the PDC staff to review and that our case was not a “common violation”.

As the hearing went on, the Board spent most of its time discussing our leaflet and its wording, saying that we had sold our approval, which we did not. In the interests of total transparency, we provided prior to the hearing at the PDC a 120-page document containing the sales prospectus in question and the corrected prospectus, copies of every advertisement published and of every article we wrote on the 2020 candidates, emails exchanged with Figueroa, Whalen and Kreiselmaier, and signed contracts or paid invoices from all candidates with whom we have dealt. However, the Commission never considered it, appearing to have already made its decision before the start of the hearing.

In fact, we have been quoted for the content of our stories on Figueroa, Whalen and Kreiselmaier. Rollins said that “the public has been potentially misled” by them because these stories “contain language similar to advertising that was also published in the same editions of Tacoma Weekly.” These articles were not written to influence opinion, but that is not what the Commission decided.

Even though Rollins said the weekly had not been found in violation of PDC rules in the past, the Commission voted to impose a civil fine of $ 15,000 on us, half of which was suspended under specified conditions. , letting us pay $ 7,500 for our “first offense.”

Figueroa and Whalen paid a civil fine of $ 150 because they “failed to include sponsor identification for the cover stories,” according to the PDC. a “paid by” notice, which is their responsibility.

IS THIS POLITICAL TERRORISM?

What is happening to us concerns our constitutional right to freedom of the press. We were penalized for stories that only Fielding, Byram and the PDC Commission considered to be advertisements. This is also addressed only to the Republican Party. During the 2020 campaign, we published articles about Democrats without any complaints.

In his PDC complaint against Tacoma Weekly, Byram named former reporter Sean Robinson as a witness. As a journalist, this is particularly objectionable of Robinson’s part, as constitutional freedoms are at stake in this case, but he has chosen to testify against another newspaper on behalf of his employer, the News Tribune. The News Tribune made no effort to continue our story, or even reach out to us for their latest and thinnest coverage on our PDC fine. A media turning its back on another is worrying.

The Tacoma Weekly doesn’t have an endless supply of cash. We cannot afford to pay the state $ 5,000 for every article we write about election candidates. We will no longer be accepting political advertising in Tacoma Weekly, not only because of what we’ve been through here, but also because we don’t want to be part of the problem by contributing to the same kind of political hatred that divides our country.

We will not write about the candidates until after their election. What would stop someone who lost a race from telling the PDC they gave us money to write about them and saying it was a political ad? It would be our word against theirs and we have just experienced this result with Figueroa and Whalen. The two lost their 2020 candidacy for Pierce County Council, then confusedly testified to the PDC that their articles in Tacoma Weekly were paid ads. Kreiselmaier didn’t win either, but she was grateful for our help and easy to work with while Figueroa was very picky and dominated our time and resources.

We are still researching and investigating these issues, and that is not the end of the story. We will share more with our readers in the coming weeks.