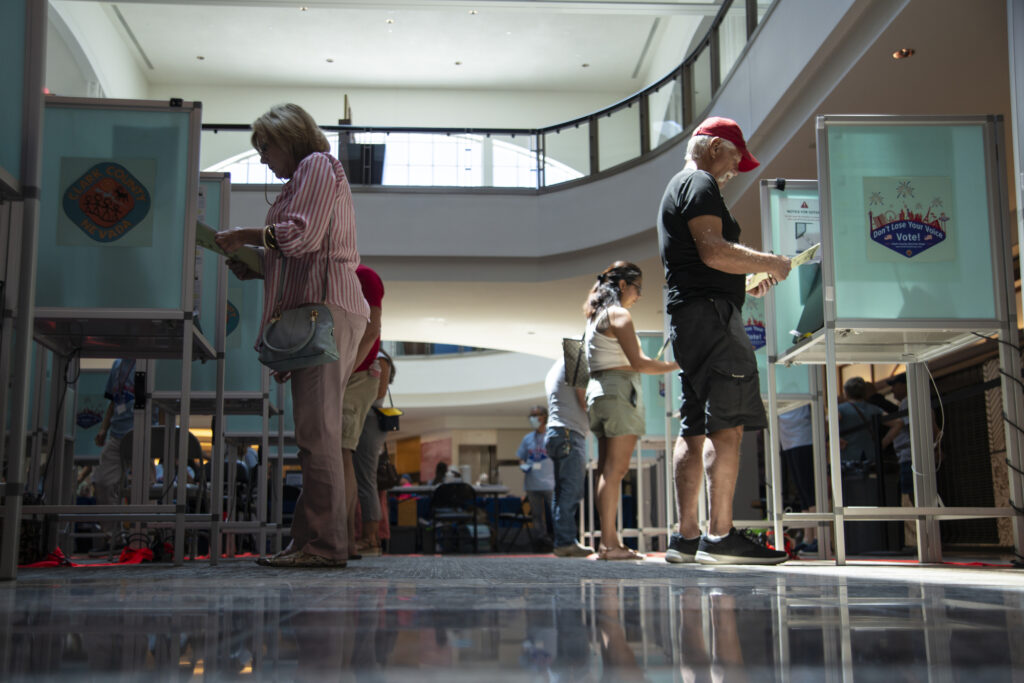 A few days ago, Alaska tried a small-scale experiment using a new voting system that Nevadans could choose to try for ourselves.

In the special election to replace the late Rep. Don Young (R-AK) held a few days ago, Alaska opted to use ranked voting to select who will serve the remaining months of the term. of the deceased congressman. At the same time, Alaska also held its primary election, which was conducted as an open primary – all candidates from all political parties were listed, each voter could vote once for their preferred candidate, and once with the count completed (due to geographic size and transportation issues, the count will not be complete until August 31), the top four vote recipients from each race will qualify for the November general election.

Interestingly, the Alaska election gives us a taste of the voting system proposed in the Better Voting Nevada initiative. The Better Voting Nevada initiative — which the secretary of state’s office says is the only initiative petition eligible to reach our ballots this year — aims to replace Nevada’s existing closed primary, in which only voters Republicans can vote for Republican candidates and Democratic voters. can vote for Democratic candidates, with an open primary very similar to Alaska’s. Additionally, the initiative would implement a ranked voting system in the general election, in which Nevada voters could rank up to five candidates in each race, in order of preference, with each rank’s votes counted. from most preferred to least.

To become law, the initiative must win a majority of votes in this election and the next election in 2024. A recent poll showed that a 15-point plurality of Nevada voters support the initiative’s substance, although nearly a third of voters currently have no opinion either way.

Although neither the existing primary election system in Alaska nor the ranked choice system used in the congressional special election are identical to the systems proposed in the Better Vote Nevada initiative, there are enough similarities to draw conclusions. useful comparisons. Alaska’s open primary, for example, is almost identical to the open primary proposed by the Better Voting Nevada Initiative – only instead of the top five candidates with the most votes reaching the general election as they would in Nevada, Alaska only allows the first four to advance. Meanwhile, the number of choices Alaskans can potentially choose using choice voting in their general election is identical to the number of choices offered in Nevada – only, where Nevadans would have up to five printed candidates from the primary. previous to ranking, Alaska allows voters to select up to four print candidates and one write-in candidate.

With that in mind, what does the electoral system proposed in the Better Voting Nevada Initiative look like in practice?

From the voter’s perspective, the answer is not entirely different from what Nevadans have now. The open primary face of Alaska’s ballots resembles a Nevada municipal ballot — list of candidates included — only with the party inscription noted in small print below each candidate. The ranking voting part, on the other hand, includes clear instructions – rank as many or as few candidates as you want, fill in your first choice oval in the first choice column, fill in your second choice in the second choice column, and so on – and a simple list of candidates and their partisan registration. Seeing the two at the same time, it’s hard to see how picking a candidate from a slate of 22 candidates (the number of candidates in Alaska’s congressional primary) would be much more complicated than scoring whether Sarah Palin is your second or third choice for the United States. representative (I would just leave her line blank). The prioritized pick list, which has only three names and a blank line for an optional candidate in writing, seems to me, at least, easier to read than the arm’s length candidate list on the main part of the ballot.

From a counter perspective, it is true that counting preferential-choice ballots is conceptually considerably more complicated than counting traditional ballots – a point that has been raised in the most widely circulated newspapers of Reno and Las Vegas. This objection would carry more weight, however, were it not for a major movement in Nevada politics claiming that a 400-page door stop of statistical simulation was somehow more intuitive and accurate than letting the computers count Nevada ballots.

In more direct terms, if voters can claim to understand this:

Then they can understand ranked voting, which uses only a little basic arithmetic at the elementary school level.

How does this arithmetic work? Because Alaska hasn’t collected all the ballots yet, all we know so far is that it looks like voters in Alaska picked the same candidates as their first choice. both for congressional primaries and special elections. As things stand, Democratic candidate Mary Peltola has a modest plurality over her two main Republican rivals, Nick Begich and Sarah Palin, in both the special election and the primary election for the sole Alaska’s congressional seat – it has so far received just over 38% of the vote in special elections and just over 35% of the vote in primary elections. Until all of Alaska’s ballots have been cast, it will be impossible to count the second-ranked votes cast for the least popular candidate. Assuming current percentages hold, that candidate will likely be Nick Begich — because Nick Begich is a Republican, it’s possible that many of his voters will have chosen Sarah Palin, the only other Republican candidate in the special election, as their runner-up. choice. On the other hand, it’s also possible that many of his candidates voted for Mary Peltola as their second choice instead, or simply left their second choice blank.

As Alaskans spend the rest of the month waiting for their election results to arrive by float plane and dog sled (if it wasn’t already obvious, I’ve never been to Alaska), we can indulge in some interesting counterfactuals closer to home.

For example, if Nevada already had the top five in the open primary system proposed by the Better Vote Nevada initiative, and the vote total remained somehow the same as it turned out in this reality, the five candidates in the gubernatorial who would be on our general ballots this year would be Democratic Governor Steve Sisolak and Republicans Joe Lombardo, Joey Gilbert, Dean Heller and John Lee. Would it matter if Democratic voters chose, say, Joe Lombardo as their second choice in the general election as insurance against the victory of a more extreme Republican candidate? (Only if Sisolak somehow received fewer votes than two Republican candidates, which is highly unlikely.) Would John Lee voters be more likely to choose Lombardo, another Clark County politician? , as their second choice, or would they be more likely to choose Joey Gilbert as their fire chief?

Looking at other races, would Amy Tarkanian, wife of failed congressional candidate Danny Tarkanian, be as likely to speak out against some of the worst statewide candidates the Republican Party has ever fielded in a general election if her husband was still a top-five candidate for Congressional District 2? Would she even need it if anyone other than partisan Republicans had a chance to vote out Michele Fiore and Sigal Chattah in the primary?

Would failed senatorial candidate Sam Brown still preach unity and love to Adam Laxalt’s Basque Fry if he and Laxalt both run in the general election? Would he even be invited?

These questions, and so many more, will never be answered — not in this election cycle, anyway, and not in the next either, although it’s fun to speculate. One question we will have to answer this year, however, is whether this new electoral system works as well as its proponents claim. Given the lackluster results our current system is producing, I’m eager to find out.

David Colborne ran for office twice and served on the executive committees of his state and county Libertarian Party chapters. He is now an IT manager, registered non-partisan voter, father of two sons and weekly opinion columnist for The Nevada Independent. You can follow him on Twitter @DavidColborne or email him at [email protected].

Is there a path to peace in Ukraine? Representative Lynch intervenes